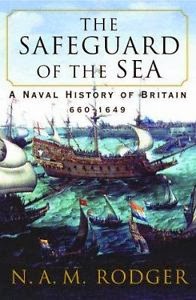 The history of the British Isles has been shaped by its island nature. Yet for much of the period covered in this book, there was no formal navy. Indeed, for a large part of this time frame, Rodger's points out that the various monarchs struggled to find the finance to maintain even a few standing ships that might be used in defensive or offensive roles. Rodger is obliged to list the various ways that in times of need, the British, or English state needed to make shipowners and their crews take on a naval role.

This lack of a permanent navy tended to leave monarchs misunderstanding, or downplaying the role of naval forces in their military endeavours. Time and again Rodger's points out that a monarch missed excellent opportunities for military victory simply because they failed to deploy their ships in more than a supporting role.

We know little of the early navy, though the author does an excellent job in telling us what we do know, and summing up the evidence for what may have happened in the past. Ships tend not to survive well, though we can summarise that for much of the first few centuries covered in the book, English monarchs, traders, raiders and fishermen used a variety of ships similar in design to those of Northern Europe. Ships of "viking" design survived in some parts of the British Isles, surprisingly late,

"longest in the West Highlands and parts of Ireland, where the Lords of the Isles and other chiefs maintained large fleets of them throughout the Middle Ages.... The Highland 'galleys'... carried into the sixteenth and even seventeenth centuries that naval traditions of the Viking world. Though adapted to use the stern rudder, these galleys were in other respects unchanged examples of a building tradition which was by then more than a thousand years old."

Maintaining ships is a costly business. Few monarchs before the late Middle Ages could do more than hold together a token force in permanence. Most of those relied on commandeering ships from others in times of need. The biggest problem, was providing food, water and other supplies for the navy when it was required, and Rodger's spends fascinating chapters detailing how this became a major part of operations. Later, the role of individuals in the 16th and 17th centuries in filling their own pockets as part of the victualling process is examined, this wasn't always seen as the corrupt practise that we would think today. Indeed many of those in leading naval positions in the Elizabethan and Stuart era died having pumped large amounts of their own cash into the King's ships.

Other than the technological and political history, Rodger's looks at the lives of the sailors aboard these ships. Rarely did naval sailors earn the wages or have the quality of life of their comrades on merchant or fishing vessels. Life was hard, and few would volunteer, and Rodger's looks at the historic role of the press-gang in making sure there were enough men to man the ships. There is also, the occasional story of rebellion or mutiny as men refused to continue to work (and fight) for short wages.

It might seem that Britain achieved a navy because successive monarchs and states gradually came to understand the importance of this military power. Oddly this doesn't seem to have been the case. The navy rose and fell, in part based on the whim of the monarch, or his finances. It also depended on the threat form overseas, or whether there was opportunity for plunder from Spanish convoys. Henry VIII is often portrayed as the founder of the modern navy, paid in large part from the one-off monies from the abolition of the monasteries. Yet after Henry's death, the navy receded in importance again, rising to new heights with Elizabeth, then declining in the run up to the Civil War era.

At the heart of the book is the story of the Armada, and Rodger's ends a few cherished myths in this excellent chapter. But the real story is how, by the end of the Feudal era, Britain was in no position to have the navy it needed without fundamental change.

"the early Stuart Navy was not merely a decayed and corrupted version of the Elizabethan Navy, but a force attempting to respond to a new threat. Certainly it was under acute strain from human and administrative failings, but it is not sufficient to explain the Navy's weakness simply in moral terms.... the basic problem would have remained, unless the political system had been able to supply an income sufficient to sustain a modern war. Many of the Navy's difficulties were not unique to it, but were symptoms of strains that were falling on government and society in general... The historian's rhetoric of 'corruption' and 'reform' has obscured many developments which might be equally well thought of as growing pains. The question in 1630 was whether the Navy and the English constitution could grow and change fast enough."

Rodgers sets much of the theme for the second volume of his work here. Increasingly placing the navy as both part of the new social and economic order and one that is helping to shape Britain's place in the world. By understanding the navy as having this role in British history, rather than the central feature that explains British dominance of the globe for the next few centuries, Rodger's creates a much more nuanced version of history. One in which British supremacy was not inevitable, indeed almost never occurred.

There are some minor quibbles. I felt that the international role of Britain's ships was neglected, particularly in terms of the establishment of early colonies, and trade. Despite the length I also thought that more detail in some of the key chapters (such as the Armada might have been worthwhile). That said, this together with volume two, is a fine work and readers will be eagerly awaiting the final part.

Rodgers - The Command of the Ocean
Posted by Resolute Reader at 8:44 pm

Nice review. It's on my shelf!