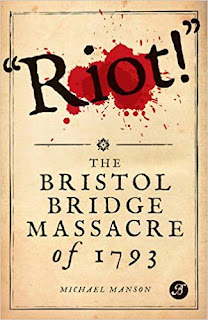 During a recent trip to Bristol for a meeting I took some time out to walk around the city and quickly got some insights into its radical history. By chance I came across a copy of Michael Manson's book in the market and bought it to learn a little more.

In the introduction to the book the author jokes that he often had to answer "No not THAT Bristol riot" when asked about what he was writing. In 1831 there was a major riot in the city when the Reform Bill was rejected. Instead Manson is writing about an earlier event in 1793 that today is little remembered, but lived long enough in popular memory to coin the defiant shout "Give them Bristol Bridge". The story is rooted in two events. The first is the decision to extend the period of time that tolls would be charged for the crossing of Bristol Bridge. This was expected to have been cancelled once the building costs had been paid off, but the lucrative income was too much for the town's leaders to abandon, and they decided to extend things. The second was the French Revolution.

The authorities were terrified. Manson quotes from a local newspaper which expressed fear at the "machinations and plots of evil and designing men". It seems that no such plots really existed, but there were certainly tensions and anger from the ordinary people of Bristol. The economic situation was difficult and a decision to continue charging tolls hit a section of the population hard. Indeed given that foot travellers didn't have to pay, but only those in carts or on horseback, Manson points out that it might have worried the authorities that the "labouring poor" were protesting.

The actual protests took place over the course of a couple of days and involved the destruction of the toll booths and pricing boards - something that echoes the Rebecca Riots - and then a much bigger protest when the bridge was reopened on Monday 30 September, 1793. A huge crowd gathered to watch proceedings, and as Manson points out, it is likely that only a small group were involved in the actual destruction of property. The situation rapidly became a confrontation as magistrates were belligerent, eventually calling in a troop of soldiers who were quickly driven off:

While the unfortunate soldiers remained on the bridge they were an easy and defenceless target... Oyster shells from the fish stalls on Welsh Back, stones, brickbats and clods of mud rained down on them. Captain Maxwell was hit on the head and his hat was knocked off.

A hasty retreat followed, but later another group of soldiers marched up with fixed bayonets. "Children in the crowd were hoisted onto shoulders to get a better view... The crowd's mood of exhilaration changed to apprehension" and suddenly the troops opened fire into the crowd of thousands. The troops then turned and fired again. In moments eleven people were killed and up to forty-five injured - though we might not know all the injured as people were wary of going to the hospital.

The reaction was anger and bewilderment. How could this have happened? A local doctor and other liberal luminaries set up an independent inquiry but despite dozens of interviews and long investigations it failed to be able to point the finger at who had given the order to fire. Officialdom, needless to say, remained quiet and Manson concludes "following one the worst civilian massacres of eighteenth century Britain no one had been brought to trial, nor had any named person been officially implicated".

Manson argues that the authorities got away with it, and it wasn't until the wider riots in 1831 and the 1832 Reform Act that their monopoly of greed and power was broken. Reading this at the same time as Jacqueline Riding's Peterloo I was struck by how frequently the British authorities resorted to violence in the 18th and 19th centuries. The police at Orgreave in 1984 might not have used rifles, but they certainly were certainly prepared to injure to prevent people protesting.

This short book is a fascinating insight to one such moment in history, when the state intervened to stop the masses having their say against a perceived economic injustice, though the bridge toll was quickly stopped. It locates the episode in the context of Bristol's economic and political development and as such is well worth a read for the contemporary Bristolian or visitor.