David Reich - Who We Are and How We Got Here 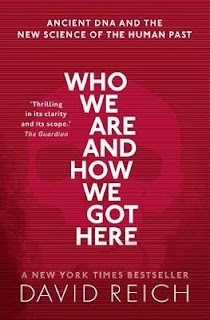 Where did we come from? When I was young I had a book that showed how humans had evolved in Africa and spread outwards, moving left and right into Europe and Asia and then colonising the whole world. At a certain point a few brave souls must have crossed the land bridge into North America and spread through the Americas. Much later in history these groups of people started to encounter each other - and the rest is history. A slightly less crude version of this history sat in my head until I picked up David Reich's book which uses the science of Ancient DNA to uncover the much more complex history of population evolution and movement to clarify much better who we are.

It is a complex book. I'll say at the outset that lacking a background in the biological sciences I struggled to really understand some of what Reich writes about DNA. Precisely how scientists can examine the strands of DNA (modern and ancient) to determine an individual's history is a complex bit of science and understanding it fully will require more than Reich's book. That said you don't need the complete science to get his argument and readers who stumble at that first block should persevere.

Reich covers a lot of ground, and I can only acknowledge some of the discussions - for instance the detailed debate about the interaction between modern-humans and Neanderthals is covered extensively. This is always a favoured point of discussion for people interested in ancient human origins so I'd encourage them to pick it up. More importantly what Reich demonstrates is that humans today are the consequence of wave after wave of migration, encounters and mixing. As he says:

Ancient DNA has established major migration and mixture between highly divergent populations as a key force shaping human prehistory, and ideologies that seek a return to a mythical purity are flying in the face of hard science.


The complexities of these migrations are written into the genes if you know where to look. So regarding the entry of humans into the Americas, it turns out that there were at least four, and possibly five migrations onto the continent that each followed different routes once on the landmass and different genetic legacies. These are written in ancient bones and modern people, and Reich gives a fascinating (though he is very frustrated) discussion of how indigenous communities in the Americas have demanded back ancient remains and refused to give DNA samples because of how they have been treated. Given the treatment of Native Americans today and in the past it should not be a surprise that they have suspicions of researchers aims - not least because sample taken has on one occasion been tied to the promise of social care. But one solution to the frustrations that Reich and other researchers feel might be if some of the communities' grievances and injustices were solved.

Those interested in the development of inequality might be surprised to learn that DNA carries traces of this historical process. Reich writes:


The genome revolution has shown that we are not living in particularly special times when viewed form the perspective of the great sweep of the human past. Mixtures of highly divergent groups have happened time and again, homogenising populations just as divergent from one another as Europeans, Africans and Native Americas. And in many of these great admixtures a central theme has been the coupling men with social power in one population and women from the other.

Later he writes about the Bronze Age when:


Powerful men in this period left an extraordinary impact on the populations that followed them - more than in any previous period - with some bequeathing DNA to more descendants today than Genghis Khan.

In other words the development of a class society which located power in the hands of a small, male, elite has left evidence in the DNA unto modern times, not least because the new class society (though Reich doesn't use this phrase) allowed these individuals to pass on their "social prestige to subsequent generations". This is also true when Reich studies communities in the Americas today - white male slave-owners were able to rape black women and they bore their children and there is a DNA legacy today. Unfortunately I think that Reich is wrong to frame this through the story of Thomas Jefferson and his slave Sally Hemings - which almost implies that these relationships were mutual rather than ones of about the power of owners over slaves.

Finally I understand that Reich has been the subject of criticism about his comments on race. In this book Reich makes his opposition to racism, discrimination and bigotry abundantly clear. He does however argue that studies of ancient and contemporary DNA with the new technology does make it clear there are differences genetically between groups of people. Reich is very clear that he does not say this means that the concept of "race" in its historic, and racist use, is correct. He argues that precisely because some groups of people separated from each other many thousands of years ago, that it is inevitable that differences arise. Indeed he gives several examples - for instance some people of African descent are more likely to have Sickle Cell Anaemia as this arose out of an evolutionary building of resistance to malaria. He also argues that these differences, while they can lead to social effects, are negligible in the context of the influence of wider social conditions. I do, however, think that sometimes Reich minimises the social context. For instance, he argues rightly that:


Suppose you are the coach of a track-and-field team, and a young person walks on and asks to try out for the 100 meter race, in which people of West African ancestry are statistically highly over-represented, suggesting the possibility that genetics may play a role. For a good coach, race is irrelevant. Testing the young person's sprinting speed is simple... Most situations are like this.


Unfortunately what this neglects is the possibility that the coach might be racist, or influenced about racist stereotypes of different people's ability to run. Or that different students have varied access to training, facilities and support because of their skin colour or background. We should treat everyone like this, but society doesn't and that is because racism in society is underpinned by longstanding ideologies. David Reich's book is a good way of demonstrating how racism is scientifically inaccurate and how far-right fantasies about race and history are completely untrue. But this is not enough - confronting racism and racist ideas will not be done just through the use of facts and figures from scientists, but also through confronting and challenging the system that breeds and uses racism to divide and rule.

Stringer - The Origin of Our Species
Finlayson - The Humans Who Went Extinct: Why Neanderthals died out and we survived
Flannery - The Eternal Frontier: An Ecological History of North America and Its Peoples
Richardson (ed) - Say it Loud! Marxism and the Fight Against Racism
Posted by Resolute Reader at 6:58 pm