Michael Roberts - Marx 200: A Review of Marx’s Economics 200 years after his birth 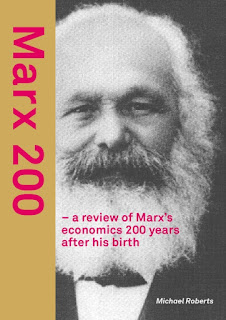 This short, but clear and well-written book is one of the better explanations of Karl Marx's economics to come out of the publishing frenzy that marks the 200th anniversary of his birth. Michael Roberts focuses on Marx's economic work and its importance today, as well as defending Marx's approach (in particular his laws of the labour theory of value, and the tendency of the rate of profit to fall) from critics, both left and right. In doing so, Roberts demonstrates the importance of Marx's ideas to understanding capitalism in the 21st century.

I have been asked to write a fuller review for a publication and I'll post that review here when it is published. In the mean time below are links to a review of Robert's book on the Long Depression and in the same vein a highly recommended book by Chris Harman Zombie Capitalism: Global Crisis and the Relevance of Marx.