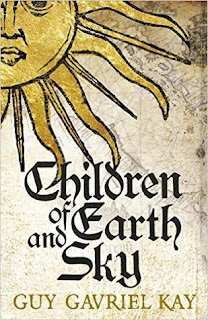 Having picked up Children of Earth and Sky on a whim in the library, I was extremely taken by Guy Gavriel Kay's writing. This sweeping alternative history is well written, engaging and doesn't suffer at all from the common fantasy troops that bedevil so much writing in the genre. In fact there is very little fantasy at all - some characters can talk to dead relatives, who advise, protect and seem to operate as a sort of sixth sense. But there is are no spells, teleportation or magical swords.

It took me a while to realise, that the obligatory map at the front is a lightly concealed plan of the eastern Mediterranean, and indeed the book is set mostly in what is now Croatia in the later medieval era. It deals with the clashes between city states of our Italy (principally a very thinly disguised Venice, called Seressa) and the Asharia empires to their east. While religious practice is completely different in Kay's world, the beliefs of the characters are analogous to Christian and Islam.

The characters are well rounded, believable and entertaining. I was particularly taken by Danica Gradek, a young woman archer who is determined to avenge her brother's kidnap by Asharia raiding parties. But the plot hinges on the mission of a young, and distinctly naive painter,  Pero Villani, who is travelling from Seressa to paint the Grand Khalif of the Asharias in the western style.

The author sets things up well for a thrilling denouncement, but there are several thoroughly enjoyable subplots and story arcs, as well as some brilliant characters. The lightness of the fantasy makes this more an alternative history, and I am already looking forward to returning to the author's writing.

Posted by Resolute Reader at 5:21 pm

The Lions of Al-Rassan is a good read too if you enjoyed this book.