John le Carré - The Spy Who Came in from the Cold 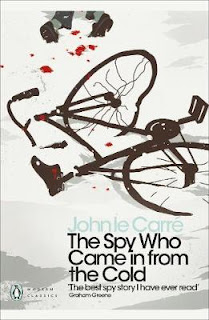 Re-reading The Spy Who Came in from the Cold ahead of getting hold of its sequel, I am struck once again how perfectly crafted le Carré's books are. In barely 200 pages the novel takes us from its famous opening scene in the dark night near the border between East and West Berlin, to a thrilling ending after an incredibly complex story. In fact, much of the story is simply people conversing, as former spy controller Alec Leamus changes sides and begins to work for the other side. Needless to say there is a deep and shocking twist, but what really makes the novel is the increasingly scary and intense atmosphere as Leamus is pulled deeper and deeper into enemy territory.

It is, of course, nearly impossible to review this book without giving away plot details. But the atmosphere for dull, grey 1960s London is worth mentioning. Beef tea, tinned chicken and cold single rooms warmed by a weak gas fire...it's not just the interrogations that are chilly. You get a real sense of Britain at the end of it's imperial greatness... it's neighborhoods are dirty, it's airports and bars grim and utilitarian. Even the drinks are bland. Everyone is tired and fed up. Even the activists of the Communist Party groups fake their paper sales figures so they can go home early.

Its a wonderful novel. It's so perfect that when they filmed it they barely seemed to change a scene. By turns punchy and shocking, and ultimately deeply tragic. This is spycraft stripped bare of any glamour - lies and counter lies, bureacracy gone mad, cowardly murders and every sentence uttered mined for information. Its not James Bond, its something far more real.

le Carré - A Small Town in Germany
le Carré - A Murder of Quality
Posted by Resolute Reader at 9:58 pm