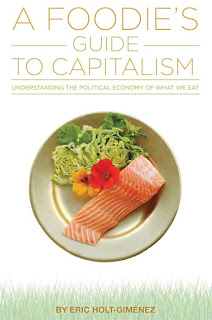 There is a growing movement of people thinking about how their food is grown, what it contains and its impact on their health and the environment. Often this is tied up with an individualistic view of improving the world - the idea that you can save the world by simply choosing the best food with the least impact on the planet. Eric Holt-Giménez explains he wrote A Foodie's Guide to Capitalism precisely to argue that this approach is inadequate:


This book is intended as a political-economic tool kit for the food movement - from foodies, farmers, farm justice activists, and concerned consumers to climate justice and environmental activists. It is a basic introduction to the economic system of capitalism as seen through the lens of the food system.

In this, Holt-Giménez succeeds admirably. His book is an accessible account of how capitalism works from a Marxist perspective that is focused on the food system, from those who work in the industry, to those who grow the food and how multinational corporations and the profit motive shape the type of food that is produced and how it is grown.

One explain the author gives is the story of the fashionable superfood quinoa. This is an ancient South America staple "poor people's food" which was discovered by wealthy foodies and rapidly became transformed into an expensive export. The locals who had relied on this food for years suddenly couldn't afford it having to switch to "cheap imported bread and pastas for nourishment" and the crop's agriculture was transformed. No longer part of a "complex cropping and animal husbandry rotation system" quinoa instead was grown in huge mono-cultural fields. In turn this displaced the llamas from the grazing areas they've lived on for millennia. Thus the "quinoa boom" gives wealthy western consumers access to a healthy food stuff, but only by breaking up traditional and sustainable food systems in South America - and forcing those peasants to eat less healthily.

The central story here could be applied to thousands of examples from around the globe. In its drive to maximise profits the food corporations transform agriculture into an unsustainable, unhealthy system at the expense of those who produce the food and the planets eco-systems. Much of Holt-Giménez's book explains how this happens and why this is, and one of its strengths is that he never forgets that food is produced by human beings labouring, usually in extremely low paid, exploitative roles. I was struck that the author focused on the peasantry not just as victims of the capitalist food system - people who are impoverished, driven off their land, living in poverty or, forced to migrate in their millions in the hope of better lives - but also as the people who can remake the food system along equitable and sustainable lines.

This focus on the workers and peasants of the system means Holt-Giménez can discuss aspects of food that are seldom acknowledged by liberal foodies - including the racism and sexism at the heart of the exploitative relations between "big food" and "big agriculture" and those who work in them. There is also some useful material here on the importance of immigrant labour to the production of food and while the examples are predominately from North America the same could be said of the UK and Europe (and no doubt many other parts of the world).

Because Holt-Giménez uses a Marxist framework to explain the capitalist food system he has some real insights that might be missed by non-socialist authors. One of these is the centrality of the question of what Marxists call "socially necessary labour time". This, in short, explains how the price of manufactured commodities under capitalism is shaped by a rough average of the amount of human labour that goes into producing something. Looking at the example of organic food, Holt-Giménez points out that it should be much more expensive as it involves more human labour - despite the farmer using less expensive "external inputs" like chemical fertliser. So organic food is more expensive, not lots more expensive, because the price is determined "by the socially necessary labour time to produce a similar conventional product". Capitalist agriculture wants to drive this down, to maximise profits, but only at the expense of those working in the system.


Ever since peasants were pushed off the land and made dependent on wages, agricultural labour has been paid far less than its social value (what it costs to reproduce a farmworker's capacity to work), much less what it adds to the price... of food products.... The low cost of immigrant labour works like a tremendous subsidy, imparting value to crops and agricultural land... The effect of criminalizing immigrant labour is to drive down its cost while passing the vale of immigrant labour power up the food chain.

Calls to "fix a broken food system" are misplaced says  Holt-Giménez. What is needed is a radical reconstruction of the food system in terms for farmers, consumers and the planet. He concludes:


Capitalism is the silent ingredient in our food. It means that the 50 million people living in poverty in the richest country on earth - many of whom grow, harvest, process and serve our food - can't afford to be foodies because they're too busy worrying where their next meal is coming from... It is also the food manufacturers' quest for profits that pushes people to consume unhealthy junk foods high in sugar, salt, fat, artificial flavours, and other additives. If we care about people as much as we do about food, and if we really want to change the food system, we'd better become fluent in capitalism.

Holt-Giménez's book explains this system very well - from land-grabs to the centrality of fossil fuel and the persistence of the peasantry. If I have one criticism it is that I felt Holt-Giménez did not go far enough in explaining how a socialist food system, one that arose from a revolutionary movement might work. I wonder if this is because of the failures of the forced collectivisation that took place under the Soviet Union. However a truly collective, democratically organised food industry would work very differently to the Soviet disaster, and would certainly offer the change of a sustainable, equitable and healthy food system. Our vision, as Holt-Giménez points out, must be far more than a fixing of the broken system. But then I think we should try and spell it out more. I have tried in some of my own writings to explore this, and perhaps in the future we'll need a "Foodie's Guide to Socialism". That criticism aside, Eric Holt-Giménez's book is a very important guide to capitalism for those who want to eat healthier, better, more sustainable and with more regard for those who work at every level in capitalism's broken food and agricultural system.

Sutton - Food Worth Fighting For
Magdoff & Tokar - Agriculture and Food in Crisis
McMahon - Feeding Frenzy
Lymbery - Farmageddon
GRAIN - The Great Climate Robbery
Graham-Leigh - A Diet of Austerity
Posted by Resolute Reader at 11:32 am