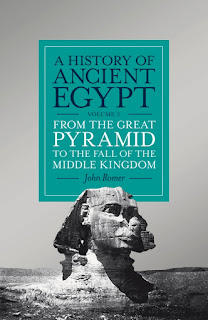 The first volume of John Romer's history of Ancient Egypt is a brilliant examination of the rise of the Egyptian state from hunter-gatherer communities. So I was excited to read the follow up volume some four years later. Here Romer looks at more familiar periods, yet unlike the first volume this history covers the period when there are written records, on the monuments, tombs and papyrus remains. Some of these will be familiar to students of the period, but to the casual reader they offer fascinating insights into the lives of people in the pharaonic state.

It is sobering to realise that much of the grand building work of the Eygptians was done with the simplest of bronze age tools. That they could erect enormous Pyramids and build elaborate tombs, filling them with materials from around the Middle East, is because of the enormous surplus of grain that the Nile could provide. This enabled the Pharaohs to employ large numbers of workers, as well as build major trade networks. Both of these aspects are themes of Romer's books and its fascinating to see how we can trace these networks that stretch hundreds of miles away from the Nile.

But what is central to Romer's history is the Egyptian state and how its very nature was shaped by the world it arose from. Take his description of the workers that produced the Great Pyramid at Giza. It was


a vast product of the labours of large numbers of those small gangs who cuts its stones with integrity and care and set them as straight and true as the irrigation ditches in the Nile fields.

Those small-sized gangs, were working in state-wide coordinating and under a consistent and masterful direction. So whilst the rural nature of that workforce is apparent in the qualities of each and every stone they laid, so the firm and subtle manner of the pharaonic administration is equally apparent in the Great Pyramid's astonishing accuracy and consistency over long years of construction. This... had been a state whose culture had not been founded on brute force or notions of national boundaries, but whose identify had flowed outwards from the royal residence, the courtly rituals, its building yards and craftsmen's workshops.

In other words, this was a state that was very different from that imagined by film-makers in Hollywood which transferred the ideals of 20th century capitalism back three or four thousand years. Romer spends much of this book examining how we have viewed ancient Egypt through the lens of contemporary thought, and the book deals, to a certain extent on how our understanding has been transformed as Egyptology has itself been shaped and re-shaped.

One part of this, as noted in the quote above, is that Romer points out that the Ancient Egyptians had no concept of "Egypt". Nations meant nothing. So while this was a class society, based on exploitation, it wasn't a class society in the way we think of capitalism or European feudalism.

Writing about the military imagery on the tomb of Ankhtifi, a governor, nobleman and senior figure overseeing farming and religion under King Neferkare (approx 2200 BCE) Romer noes that


Rather than the generals leading conquering armies up and down the valley of the Nile... these images and texts are more likely to record the exploits of little bands of local militia patrolling the various regions of the lower Nile, maintaining, in the absence of central state control, the ancient pharaonic virtue of good order for their local populace.... the fearful links between war, nationhood and sovereignty..were not yet forged; those very concepts.. had no existence in that distant past. There are as many donkeys as soldiers drawn on the walls of Ankhtifi's tomb chapel... where fine food, civic welfare and the good life are presented as their owners' ambitions and accomplishments.

In other words, Ancient Egyptian society cannot be understood in terms of contemporary social relationships or culture. It has to be understood in its own context. This might seem obvious, but Romer shows how countless historians and archaeologists have made this mistake in the past, and continue to do so. 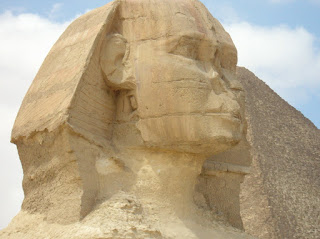 It is particularly important to understand this when looking at the things that the ancient Egyptians revered. For instance, they are know for their luxurious grave goods, expensive jewellery and so on.

Yet, this was "a society without money, in which nothing was counted as explicitly economic or political" and "the prime purpose of the acquisition of such goods was not to gain prestige or possessions in the modern manner".

To explain this, Romer looks at a treasure trove found buried  full of goods that had been imported from far away. The chests of treasure are


best seen as holding goods brought from regions far outside the orbit of the state and buried seed-like in the house of a court god, between the seen and unseen world - an act that had beautifully expressed a concept which is explicitly stated in later texts, that the domain of pharaoh encompasses all earthly things.

While Egypt was a class society, its rulers maintained their rule and their position by performing a real function for the mass of society - keeping things on track, organised and balanced. The production of material goods had real benefits for a minority, but this was not the driving force of society as a whole.

John Romer focuses on the nature of the Egyptian state, so those looking for a history of daily life in Ancient Egypt won't really find it here. Nor is this quite as readable as the first volume as there is much less of a historical narrative. Nevertheless together with volume one, this is an essential read that puts other works on the period in a very real context. I hope it isn't four years before the final volume arrives.

Romer - A History of Ancient Egypt: From the First Farmers to the Great Pyramid
Romer - Ancient Lives: The Story of Pharaohs' Tombmakers
Posted by Resolute Reader at 9:41 pm