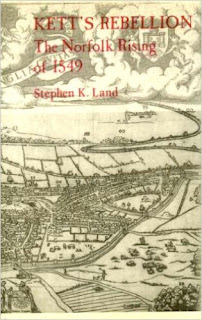 This is a good introductory book to the history and context of Kett's Rebellion, the large agrarian uprising that shook East Anglia in 1549. The author does well to contextualise the rebellion, locating it in widespread rural discontent, linked to the changes of the Reformation, but most importantly economic problems in the countryside.

Land argues that unlike the Prayerbook uprising that takes place almost simultaneously in Devon and Cornwall, "religious doctrine was not a factor" in Norfolk. Instead, he suggests that the problem was "the gradual transition which was taking place between the manorial system of local economy, in which each village was a self-sustaining agricultural unit... to a capitalist economy."

I'm not convinced by this. Not least because it suggests that the motive for rebellion was something that was to come, rather than the day to day reality of rural life. Land goes on to suggest that the uprising was inherently conservative, seeking not to displace the existing hierarchy, nor challenge the duke of Somerset, Lord Protector for the young Edward VI. However I think it's fairer to argue that what was taking place was an attempt by a section of the rural population to assert greater control over their lives, and their villages, in the face of a changing world. The 29 articles that they wrote from their camp at Mousehold Heath outside Norwich, clearly are attempts to blunt the powers of the gentry, strengthen the hand of the smaller landowners and poorest and protect traditional and common rights. To see this as simply conservative is to fail to understand that social change always takes place in the context of already existing situations, which understandably those participating want to protect if they feel they are losing rights or wealth.

This disagreement aside, Stephen K. Land's book is an excellent introduction to the rebellion. It has a detailed account of Kett's assaults on Norwich and the reason for his eventual defeat. It also rightly argues that Somerset's fall in the aftermath of the rebellion was not a direct result of the uprising, but the opportunity for those who disagreed with his agrarian policies (which might be roughly described as reformist) to do away with someone who was perceived as encouraging rebellion.

The Robert Kett that stands out from this work is less the precursor to those who fought for "rights" and "freedoms" and instead a powerful defender of the interests of those around him. Sadly Tudor society had no space for those who became an alternative source of power to the gentry and the aristocracy, no matter how much they claimed to be acting in the interests of the king and his realm. The judicial murder of Kett, his brother and other leading figures, together with the deaths of hundreds of rebels outside Norwich is the result of the Tudor state reasserting its rule. Lang's book is a good introduction, but readers will benefit from reading other works around the subject to see how more recent academics have framed the uprising differently.

Wood - Riot, Rebellion and Popular Politics in Early Modern England
Caraman - The Western Rising of 1549
Cornwall - Revolt of the Peasantry 1549

Posted by Resolute Reader at 7:37 pm