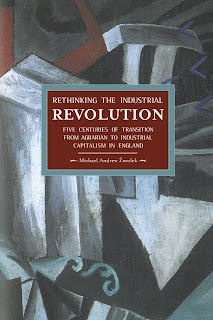 There is something about a book of this scope that almost defies reviewing. How can a reviewer do justice to a work which spans in enormous detail five centuries of history with a thorough discussion of historical work about the period?

It should be said at the outset that Žmolek's book is a superb read and is a remarkable piece of scholarship. He has a unparallelled grasp of the material, both in terms of the historical record and his understanding of contemporary analyses of the subject under discussion. This book will undoubtedly be debated and studied for many years. Disagreements there may be, but this is a fine work which packs an enormous amount into its 900 pages. For instance, Žmolek summary of the importance of the English Civil War in the transition to capitalism is one of the best I've read.

The question of the origin of capitalism is not merely of academic interest. The dynamics of the transition from feudal society to a capitalist one have much to teach us about the process of historical change. But they also shaped today's society. Žmolek's central point though, is that the process was not an inevitable one - "industrial capitalism did not arrive unopposed" [347] he writes. Nonetheless the process that led to the eventual development of industrial capitalism had deep roots. Žmolek notes that "Marx sought to explain how capitalism developed out of the action of feudal society itself". [19]

That this occurred at all is, Žmolek points out, surprising:

For the transition to take place required a "protracted" class struggle. This conflict, "between direct producers and surplus appropriators both acting as economic agents seeking to reproduce themselves as they were, but culminating in the unintended consequence of general market dependence and new economic imperatives." [40]

Here we see one of Žmolek's central themes. The processes of change that took place, both in the transition from feudalism to an agrarian capitalism, and in the development of industrial capitalism, saw different classes in society battling for their own interests. In some cases, such as the struggle of the English peasantry against the loss of their lands and rights, this was a defense of what they already had. But their lordly opponents ended up in a position where they were renting access to land and were becoming "subject to new market pressures in the form of competition for leases as well as price competition". Thus the process of conflict itself was resolving a contradiction between the two classes, but generating new conflicts and contradictions in wider society.

Instead Žmolek argues that the key reason for the development of industrial capitalism was the existence and expansion of "agrarian capitalism". Between 1700 and 1750 Britain became a world power, it was able to do this because of the growth of agrarian capitalism. This was already "steering the economy in the direction of a broader capitalism" [165] by the time technologies such as steam engines, and blast furnaces arrived. One example will suffice, by 1780, English agriculture needed between two and three hundred thousands tons of iron annually to manufacture farm implements. [167] But this was not the only cause and Žmolek argues against some theorists who simply see agriculture as stimulating industrial advance.

Here he marshals all sorts of factors, such as the importance of exports, the role of taxation and improvements to agriculture itself to show how the development of industrial capitalism was a much more complicated process. Central to this was the systematic destruction of the old rural order, enclosures, clearances and the breaking of common rights together with the growth of urban areas. The artisan and the peasant were both "resisting the transformation of a labour process regulated by custom into abstract labour regulated by the market alone". [605] Workers had to be forced to accept the new way of doing things and this cleared the way for untrammelled capitalist logic and once the industrial revolution began, it fed upon itself:


the emergence of a new and capitalist economic logic in Britain, where competition uniquely compelled employers to seek ways to cut costs through innovation, provided the economic context in which the systematic application of technology to production made sense in a way that it simply did not and never had in non-capitalist societies. [813]

For Žmolek the industrial revolution was the way that capitalism was able to place manufacturing under the control of capital. But this was not an automatic process. Žmolek again points out how workers in early factories fought to retain old "customary" rights and traditions, and how this often led to brutal confrontations before labour was subordinated to capital. For much of the book, Žmolek shows how this victory was won, and the many ways that workers tried to resist the changes. He also puts an interesting argument that the workhouse was much more than simply a method of disciplining the poor, but was also the "first experiment" in organising labour in concentrated groups.

So the Industrial Revolution takes place because agrarian capitalism initiates a series of processes that lead to large scale class confrontation. It is, Žmolek concludes, thus "untenable to view capitalism as an economic system that resulted from the 'natural' evolution of European society and economy out of feudalism, fulfilling the latent potentialities of pre-capitalist commerce and industry" [839]/ But because capitalism could only come about by "suppressing" those who fought against its imposition, the process "might have resulted in have resulted in an entirely different social order". Whether or not the reader quite agrees with that particular conclusion, one thing that Žmolek proves with his important book is that capitalism is neither natural, nor inevitable. Which of course begs the question of how we replace it with system based on a more rational organisation of society.