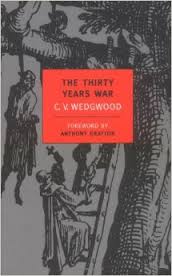 The Thirty Years War ran from 1618 to 1648. It was a barbaric time of famine, plague, pillage, rape and endless violence. Millions of people died, were displaced and suffered. The population of Germany, according to Wedgwood's history, declined by seven million.

This is a detailed history of a period that relatively few in the English speaking world will know much about. C.V. Wedgwood's style is easy, yet the material is complicated and readers searching for an introduction to the Thirty Years War might want to begin elsewhere. The conflict involved a vast number of different states, dragging in a bewildering variety of princes and generals, some of whom last barely a few pages before they die on the battlefield. Wedgwood does her best to keep control of the different strands of the history, and while I lost track on occasion, her narrative does the material justice.

While the War is often described as a religious war, it was much more than this. Its intensity and its length were linked to the very nature of society in Germany at the time. Hundreds of competing principalities each had a complex web of allies and obligations which meant that once war began it became impossible to prevent it spreading. It is one reason that peace negotiations went on for years before treaties became even possible.

But religion is key, and the desire by the Catholic Church and its affiliated rulers to role back the changes of the Reformation combined with wider ambitions to create a dangerous situation. As Wedgwood notes


Barely a century had passed since the Reformation, and the Catholic Church cherished the far from illusory hope of re-uniting Christendom. The attempt failed. No single cause can explain that failure, yet one stands out above all others. The fortune of the Church became fatally interwoven with that of the House of Austria, and the territorial jealousy evoked by that dynasty reacted upon the Catholic Church by dividing those who should have been her defenders.

Because land was still the dominant source of wealth in the feudal states, the acquisition of more land was a key way that lords could become richer. Germany, with its enormous number of competing states, and hostile interests further afield was a powder keg ready to explode:


The Spanish King wanted the Rhine so that his troops and money could be easily transported from north Italy to the Netherlands. The King of France, and the Dutch... wanted allies on the Rhine to stop this. The Kings of Sweden and Denmark each sought allies against the other on the Baltic coast, against the King of Poland or against the Dutch. The Pope attempted to form a Catholic party in Germany opposed to the Hapsburg Emperor, the Duke of Savoy intrigued to be elected to the imperial throne.

Wedgwood explains that even larger states could be fatally divided when even in "a single province as many as half a dozen smaller states might arise".  There were, she says, over three hundred potentially conflicting authorities in Germany.

When war came it was brutal. Armies in the Thirty Years War were mass professional affairs, with huge trains of civilians following them. But the soldiers were rarely loyal to a cause or a leader, only to their banners and their pay. Defeated troops regularly switched sides, and Catholic armies were made up of Protestants and vice-versa. Even national armies, with the exception of the Swedish invasion, where frequently made up of men from many different countries, fighting for money and loot rather than a larger cause. Wedgwood even notes at least one case when a Catholic army mutinied because the men were instructed to partake in the Catholic Mass.

As the war dragged on, crops failed, were destroyed or dug up and peasants and their families joined the armies as the only chance of survival. When peace came, hundreds of thousands of armed men remained in the field, posing significant problems for the authorities.

Peace came in spite of those at the top, rather than because of. Wedgwood notes that "ruling powers.... asked for peace always in a general sense: when it came to practical action they were always prepared to fight for a little longer in order to gain their own particular end- and make a more lasting peace". Such is the logic of feudalism.

But peace did come, and Wedgwood notes that the war had major social and economic impacts on Germany. Much like the aftermath of the Black Death in England in 1381, the loss of millions of peasants led to a rise in wages and a decline in prices, but in the long term Wedgwood does conclude that "social hierarchy emerged from the war as rigid as before". But the peace was "ineffectual" in solving the wider contradictions of European feudalism. Wedgwood laments that the enormous suffering of the mass of the population during the Thirty Years War was only replaced by further suffering as "religious wars" gave way to "nationalist wars". There is some truth to this. The defeat of Austria, Wedgwood argues, opened up the space for Germany to become a European power. But much wider social and political changes needed to take place before a modern Europe became finalised.

C.V. Wedgwood's book is an excellent historical work for this period. It is, on occasion, a difficult one to follow, but it does repay study. In places scholars might find source material superseded by later research, but this does not diminish the scale of Wedgwood's achievement in telling the history of a deeply catastrophic period of history.