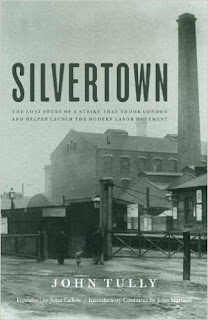 In 1889 nearly 3,000 workers at Silver's, an enormous factory in East London, in Silvertown went on strike. The men and women who walked out were inspired by the New Unionism that was sweeping the city. They'd seen mass strikes by dockers in the East End that had won major victories and they wanted improvements too.

Their twelve week strike has almost been forgotten today. Perhaps because it ended in defeat. But John Tully's important book rescues the struggle for readers today, and, perhaps surprisingly, the reader will find that we can learn much from those brave men and women.

Silver's was enormously profitable. Having made a fortune from rubber, the plant was now a central part of a world-web industry. Their products literally stretched across the globe - a key, and very profitable, part of their work was manufacturing the telegraph cables that spanned oceans. Silver's even owned the ships that laid the cables, as well as the plantations that provided some of the raw material. Even after the twelve week strike, with production badly hit, Silver's could still declare "a half yearly dividend of 5 percent, or 10 shillings a share, tax free". Its shareholders, which included some of the most important political figures in the country, could breathe a sigh of relief. Not only were the profits still rolling in, but the company had faced down New Unionism.

For the workers who made these profits possible, life in the East End was appalling. Tully quotes some figures.

As Tully comments, behind these figures "was a universe of human pain and sorrow".  Low wages meant poverty and hunger, lack of medical care and appalling living conditions.

The strike was impressive. At the forefront of it were women workers who led the collections, walking mile after mile to collect money for the strike fund. Some of them walked so far they wore out their shoes and new ones were purchased out of funds to enable them to carry on raising solidarity.

Eleanor Marx, who played a central role in the dispute argued explicitly for the equality of women and men in the struggle. Tully quotes one account of her speaking:


"she... appealed strongly to the women. They must form unions and work in harmony with the men's trade unions. As the dock strike had taught them the lesson that skilled and unskilled labour should work together, so the present strike should teach them a further great lesson, that they could only win by men and women working in combination. The capitalist was using women to underwork men and that would be the case until women refused to undersell their brothers and husbands."

Eleanor Marx was tireless in her work in support of the Silvertown strikers. But this was matched by the enthusiastic hard work of the strikers and their families. Regular marches, protest meetings and rallies took place from Hyde Park out to Silvertown itself. Large pickets tried to stop scabs going in, and encourage those workers who remained inside to come out.

For the strikers this was the crucial problem. New Unionism is so called because it represented a break from the old craft unions. By the late 1880s, these unions were still powerful (and sometimes very wealthy). But they represented a small and distinct layer of a growing working class. The power of the union was mostly used to protect the interests of a tiny minority of skilled craftsmen, and their leaders often looked snobbishly down on the new, mass based, trade unions. The failure of a handful of engineers to join the strike meant that Silver's management were able to keep the plant running and provide work for scabs imported from outside London to undermine the strike.

One can speculate about the debates inside the Silvertown strike meetings about how to win. Tully doesn't provide us much information on what took place on a day to day basis - perhaps because none is to be had. We can guess mass pickets by the strikers weren't enough to stop the scabs going in. Perhaps solidarity action by other groups of workers would have helped shut down the plant in the face of such determined management. Certainly the government and the state were doing everything they could to intimidate, imprison and occasionally beat the strikers back to work. In the face of this, only mass solidarity action could have won - though had the engineers walked out it would have made victory much more likely. History can only judge the AES in East London as helping management win in Silvertown.

The defeat of the Silvertown strikers came with a bitterly cold winter as the strikers were starved back to work. Hundreds were victimised for their roles and some never worked again. The defeat helped pave the way for a renewed employers offensive against the workers, which together with an economic down turn helped undermine the gains of New Unionism.

John Tully has done the working class movement and labour history a real service with this detailed book on our forgotten history. Sadly it reads all to familiarly, the story of greedy bosses and shareholders and underpaid, poverty stricken workers desperate for better conditions. But there is much in this book that can teach the modern trade unionist. The Silver's workers were considered unorganisable, and yet they fought a powerful industry nearly to a standstill. From their tragic, and unnecessary defeat, we can learn lessons and be inspired to fight ourselves.