Jonathan Weiner - The Beak of the Finch: Evolution in Real Time 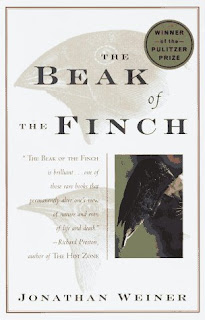 The finches of the Galapagos Islands are the poster animals for Charles Darwin's ideas. On Darwin's voyage he shot and identified a number of species of finch and their variations on the different islands helped give the young scientist clues that hinted toward his theory of evolution. The finches have developed amazing variations to adapt to the different ecology of the various Galapagos Islands, and this book explores that evolution and the scientists who have studied the finches as part of an exploration of how evolution actually works.

Darwin, and most natural scientists who came after him, before the late 20th century believed that evolution was a extremely slow process, observable through fossil remains. In part that was because they lacked the tools to see it, in particular the genetic science that is now such an important part of evolutionary science. Even with this science, it is still difficult for the layman to imagine the actual processes taking place which lead to the evolution of one species into another.

A quote from Thomas Huxley, one of Darwin's most able and enthusiastic supporters, illustrates this well,


the more we learn of the nature of things, the more evident is it that what we call rest is only unperceived activity; that seeming peace is silent but strenuous battle. In every part, at every moment, the state of the cosmos is the expression of a transitory adjustment of contending forces; a scene of strife, in which all the combatants fall in turn. What is true of each part, is true of the whole.

Huxley ably captured the processes that are observed in the finches described in Weiner's book. Though he couldn't have comprehended how they were working. Finches live, like birds everywhere, by eating various foods, finding a mate and escaping danger. Some of them are more able to do these things than others, and often tiny differences can make a difference to whether or not one bird or another is able to survive. One of the surprising things in this book is how tiny these differences are, and how big an impact they can have. The finches are famous for their different beaks, and Weiner explains how during periods of abundance the finches eat varieties of food. In times of shortages however, the different shapes of their beaks allow them to specialise in foods, and here is where tiny differences have the most impact. Talking about the Grants, two scientists who have made a career studying the finches in intricate detail, Weiner writes:


Thus the Grants suspect that the finches here are perpetually being forced slightly apart and drifting back together again. A drought favors groups of one beak length or another. It splits the population and forces it onto two slightly separate adaptive peaks. But because the two peaks are so close together, and there is no room for them to widen farther apart, random mating brings the birds back together again.

It is worth noting Weiner's consideration of environmental conditions here. They play a key role in evolution, though he includes other factors such as the role of people bringing new species, or changing the landscape of areas that in turn force changes on other species. Writing in the early 1990s, Weiner doesn't ignore the threat from global warming, though he clearly could not foresee the amount of climate change we would be facing just twenty years later. But Weiner understands that the greatest threat to diversity is human action, and he explores in details the way that this can impact upon species population and evolution.

Sometimes, the tiny changes don't get fusioned back together. And tiny differences become permanent transformations.


What drives the first widening wedge? It is... a little like the splitting of an amoeba: one population goes one way and the one goes the other. You have one vessel, one gene pool, and you end up with two. And the beginning of the splut can be a very small thing,... Even a detail that has no adaptive significance can make all the difference in the world. In other words, the origin of species can lie in the kinds of small, subjective decisions and revisions that in our species come under the heading of romance.

Sexual selection isn't the only way that species diverge, though it does seem that the shapes of beaks of finches are one of the key things that potential mates look at when hunting a partner. Perhaps key to finch evolution is the way that environmental changes, such as droughts, force a wedge between birds with different lengths of beaks. In examples studied by the Grants, we have drought conditions favouring long and short beaks. The gap widened as the drought continued, and the longer this went on, the harder it would have been for random mating to bring them back together again.

With any book that has such extraordinary detail and is written so well, it's difficult to summarise it all in one review. One thing did strike me though. Weiner is able to write brilliantly because, in part, he is describing the extraordinarily persistent and detailed work of a small group of professionals over many decades. The work of Peter and Rosemay Grant is at the heart of this work, but so are many other scientists. That they were funded to spend years of their lives on an isolated island measuring beaks and observing finches' mating has been crucial to how we have begun to understand evolution. It is worth thinking about this when universities cut their budgets.

Jonathan Weiner's excellent book is one of the best introductions to this topic that I have ever read. It deservedly won the 1995 Pulitzer Prize when it was first published and remains extremely readable and relevant today. It would be fantastic if it could be updated with more on the work of Grants and their colleagues since 1995, as well as further discussion on global warming and its impact on the Galapagos Islands. But even so, this is well worth getting hold of.

This really does sound fantastic!