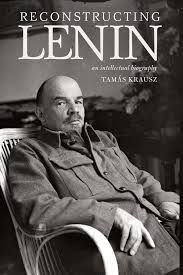 In recent years there has been a intense discussion about the ideas of the Russian revolutionary Lenin. Some of this has its roots in the class struggle - the Arab Spring and the Occupy movement both threw up questions about the nature of revolutionary organisation. Others have attempted to re-examine Lenin to critique existing organisations and ideas. There have been some excellent books, articles and events debating these questions.

Tamás Krausz's important new biography must be seen as part of this debate. His work is very much an attempt to re-examine Lenin's ideas as part of a resolute defence of Lenin and his work. Krausz is clear that this is intended to take forward the revolutionary movement that can challenge and defeat capitalism.

The Lenin that comes through on these pages is far from the mechanical, doctrinal individual, whose personal single-mindedness somehow embodied the future authoritarian Stalinist state. Rather he rigorously applied the ideas of Marxism to the concrete situation, confident to update and alter his viewpoint depending on circumstances, and ever open to learning from workers. Indeed, Krausz highlights Lenin's own celebration of the importance of the workers' own spontaneity and self-organisation


Lenin considered the workers' soviet as the political arm of the uprising and an institution of the revolution. The soviets and similar popular organizations... were the product of the workers' autonomous agency. As Lenin wrote about the uprising of December 1905, 'It was not some theory, not appeals on the part of someone, or tactics invented by someone, not party doctrine, but the force of circumstances that led these non-party mass organs to realize the need for an uprising and transformed them into organs of an uprising.'

That said, Lenin's Marxism began with the concrete situation and ended with the need for the revolutionary overthrow of capitalism. This comes through clearly throughout the book, but I found the discussion of Lenin's attitude to the National Question, particularly illuminating. Krausz says


Lenin always approached the role and character of national movements from a historical and class perspective. He did not support the struggle of each and every small country fighting the great imperialist powers. He also had a strictly imposed condition: the uprising of any class more reactionary than the bourgeoisie of the center countries is not to be supported.

It is precisely this approach that allowed Lenin to become the leading revolutionary critic of war and capitalism during the First World War. Those who supported the war ended up siding with their own ruling class. But those who did not get the question of national liberation also failed the revolutionary movement. "Lenin considered national self-determination a fundamental issue of democracy that revolutionaries 'may not undercut!'." These debates continue to have a resonance today. Lenin, for instance, opposed the slogan of "No Borders", not because he wasn't for a world without borders, but because in the concrete situation, demanding the self-determination for oppressed countries meant the defacto creation of borders.

Another excellent chapter is on the nature of the early Soviet regime. Here Krausz describes how Lenin again saw everything through the lens of the defense of the revolution. "To Lenin, mass terror counted as the most extreme instrument of struggle against the enemy and was to be applied (and often demanded by him in vain) on a case-by-case basis". Given the way that under Stalin the Soviet Union's peasantry were forced into collectivisation, its interesting to read that


In April 1919, some peasants in certain parts of the country were going to be forced to join the collectives, rather than doing so of their own free will - a behavior categorically prohibited by Lenin in the name of the Council of People's Commissars. The peasant base formed the backbone of the Red Army, and 'Compulsory measures of any kind to make the peasants pass over to the communal working of the fields are impermissible. Non-observance of this will be punished with all the severity of revolutionary law'.

Krausz's treatment here of the Civil War and the suppression of the Constituent Assembly is refreshing - seeing Lenin (and the early Soviet state) actions through the question of the defence of Revolution. Lenin is often accused of celebrating revolutionary violence. But his approach was very different, Krausz notes how in the aftermath of the defeated 1905 revolution Lenin advocated the use of political terrorism if it took the movement forward, however, he quickly changed his mind after seeing how terrorist actions in response to counter-revolution made the situation worse.

Later, as it becomes clear that the Russian Revolution was isolated, Lenin was forced down even more pragmatic roads. Krausz explores in detail the years of War Communism and the NEP, seeing these as steps along particular routes attempting to deal with particular situations. Lenin and the leadership of the Bolsheviks had always been clear that without international revolution, the Russian Revolution would become isolated. The end of the First World War did lead to revolutionary upsurges elsewhere, and real hope in Russia that countries like Germany would overthrow capitalism, and the centre of revolution would move to Berlin. Unfortunately Krausz downplays this. His focus on Russia implies that the key moment for international revolution was the failed Red Army assault on Poland in 1919. And at times, Krausz suggests that there was limited potential for a Germany revolution and for Bolshevism to spread among western workers.


Lenin also mentions another defining trait - that a majority of the Western workers were not ready to seize power. However, he only sensed that they were subjectively ill-prepared for it, and he neither analyzed the causes nor sought the origins of this phenomenon. He understood that revolutionary Bolshevism could not penetrate the cultural traditions of the Western working masses, but he lacked a well-differentiated sociological analysis of the reasons for the inner stratifications of Western labor.

If Lenin really believed that "Bolshevism could not penetrate the cultural traditions of the Western working masses" then he gave no real sign of it in his writings. Krausz bases much of this on a description of a single visit by British workers to Russia in 1920 (though he fails to mention that in 1919 and prior to the First World War) there had been near revolutionary strike movements in Britain.

While this is a disappointing it should not be used to completely rubbish Krausz's book. The author rescues Lenin as a practical revolutionary, constantly returning to the concrete situation, analysing, listening and learning from those around him. For many decades after the Russian Revolution, we were told there was "actually existing Socialism" in Russia. Lenin would have been appalled. As Krausz points out,


Lenin stated in his last public speech that the realization of socialism was not on history's agenda yet. Now was the time of the transitional period, of creating the historical-cultural preconditions for socialism

Tamás Krausz's books deserves to become a key text for those trying to change the world. As he points out, the discontented keep running into Lenin, which is why his work is endlessly debated. This is not an abstract debate, but one that Lenin would have approved of. Here's Krausz ably summing up why


certain authors have deliberately eliminated from Lenin's legacy the essential philosophical tenets and methodology that made him who he was. For one thing, they neglect his most important practical discovery, namely his precise theoretical interpretation of Marxist dialectics, its reconstruction, and his practical application of those dialectics. Lenin understood, even on the basis of its Hegelian roots, that dialectical materialism (and epistemology) incorporates the self-movement in things, phenomena, processes, as well as the conscious human activist to transform society. Thus it is not a matter of the historical dialectic of ideas, but rather the self-movement and self-creation of history through social classes and individuals. For Lenin, epistemology was not simply a matter of getting to know reality. It did not exist for its own sake. He aimed instead to seek out the truth, the solution to contradictions within things, and the struggles that resulted. He wanted to see a radical transformation of the world so that humanity could rid itself, by its own will, of the dominant powers. Lenin gave Marx's eleventh Feuerbach thesis a new urgency: 'The philosophers have only interpreted the world, in various ways; the point is to change it'. In other words, history was not an abstract whole, an object of study for him, but a tool through which the elements and tendencies to be continued or transformed could be located in the midst of 'collapse'.

Lenin - Proletarian Revolution and the Renegade Kautsky
Nation - War on War: Lenin, the Zimmerwald Left and the Origins of Communist Internationalism
Cliff - Revolution Besieged
Cliff - All Power to the Soviets
Krupskaya - Memories of Lenin
Posted by Resolute Reader at 6:17 pm