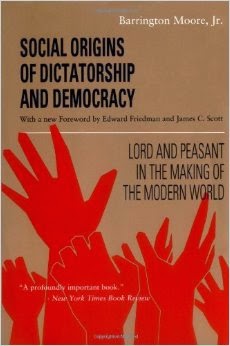 Barrington Moore Jnr's Social Origins is one of those books that always seems to pop up in bibliographies. It is a sweeping work, that analyses the trajectories of many different countries, examining how they arrived at their modern states. Written in the 1960s it is in many places dated, and his critique of Marxism is very much a critique of the Stalinist version that dominated the era. The author's central argument is that it is the role of the landed aristocracy in rural areas, interacting with a developing capitalist class that creates the political and economic structures which determine the type of parliamentary democracy that evolves. Writing about India, he says,

"we have observed that an alliance between influential segments of a landed elite and a rising but weak commercial class has been a crucial factor in producing a reactionary political phase in the course of economic development. The British presence in India prevented any such coalition and thereby contributed to the establishment of a parliamentary democracy."

"The weakness of a national aristocracy was an important feature of seventeenth-century India that, as in other countries, inhibited the growth of parliamentary democracy from native soil. Parliamentary institutions were to be a late and exotic import."

Most of the book is a forensic analysis of the different paths of development for various countries. I suspect that most readers will get the most from this history, and I found the chapters on France and England good summaries of the history of the development of modern parliamentary democracy. Barrington Moore is good on the role of force in history, and the role of competing class interests in shaping historical outcomes.

"To regard the radicals as an extremist band, an excrescence on the liberal and bourgeois revolution is to fly in the face of this evidence. The one was impossible without the other. It is also quite clear that the bourgeois revolution would not have gone as far as it did without pressure from the radicals. There were several occasion, as we have seen, when the conservatives of the moment tried to stop the Revolution."

"The sans culottes made the bourgeois Revolution: the peasants determined just how far it could go. The incompleteness of the Revolution on the other hand, an incompleteness quite largely traceable to the structure of French society in the late eighteenth century, meant that it would be a long time before a full-blown capitalist democracy could establish itself in French society."

But here is an example of what I think is Barrington-Moore's major theoretical weakness. It is of course true that paths of historical development inevitably effect more recent history. But, even though he denies it, the author comes close to implying an inevitability to the 20th century outcomes to these paths of development. He hedges his bets when writing about Japan

"By the time Commodore Perry's ships appeared in 1854, the Tokugawa system had suffered substantial decay. The decline of the old order, together with attempts to preserve the privileges of the agrarian elite, had already given rise to some of the social forces that eventually culminated in the regime that dropped its fateful bombs on Pearl Harbor in 1941."

But goes further in writing of China where he implies that "decisive characteristics of Chinese society during the last great dynasty, the Manchus (1644-1911)... impart a direction to the subsequent development of China that culminated... in the Communist victory". A very early beginning to Chairman Mao's victory.

Fascism was ultimately successful, he argues, in Germany (and as Barrington Moore characterises it, Japan) because of the late development of industry. So while Barrington Moore argues, that there isn't "some inexorable fate [that] drove Germany toward fascism from the sixteenth century onward" he does come close.

So while we can agree on some of Barrington Moore's ideas, we have to reject some of his more sweeping generalisations. In particular, I think Moore suggests that particular structures inevitably lead to particular outcomes. Take his gross mischaracterisation of the Russian and Chinese revolutions

"The main areas where peasant revolutions have in modern times had the greatest importance, China and Russia, were alike in the fact that the landed upper classes by and large did not make a successful transition to the world of commerce and industry and did not destroy the prevailing social organisation among the peasants." 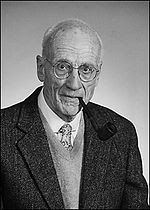 What Barrington Moore is missing here, and everywhere else in his book, is the active role of the classes in determining the outcome of history. The Russian Revolution was successful not simply because the aristocracy and failed to destroy the peasants social organisation (though it might have done given another 50 years) but because there were active political parties in the country that shaped the revolutionary movement of workers and peasants to smash the state. Similarly, Fascism was triumphant in Germany and Italy because powerful movements failed to organise correctly to break the right-wing, and because Hitler forged a powerful fascist movement. In some countries, Britain and France for instance, nascent fascist groups were broken by working class movements. Nazism wasn't inevitable in Germany, it was the joint failure of the social democrats and Communists to unite that left Hitler able to win.

Barrington Moore's book also suffers from two other weaknesses. At times it is very heavily written and turgid. He is also prone to sweeping generalisations: "Though I cannot prove it, I suspect that one of the few lasting and dependable sources of human satisfaction is making other people suffer".

Readers will no doubt continue to grapple with Barrington Moore's book while engaging in debates around the development of capitalism. I remain unconvinced it is a particularly necessary read for others, and despite his liberal radicalism, his failure to understand more radical democratic solutions means the book ends up justifying the "democracy" of Britain and the United States. The later, after all, a regime that also dropped "fateful bombs" on Hiroshima and Nagasaki. With this selective view of history, and its overly structuralist approach to historical change, Barrington Moore's Social Origins remains a thoroughly bourgeois work.

I used to teach Moore when worked in a political science department. I think his work holds up well overall. The most important thing he did was reinsert the largest class of humans, the peasantry, back into the historical narrative. The Marxists had done a very thorough job by the late 1960s of eliminating the peasants as a group of people with any agency in the various academic historical narratives of Europe and Asia.