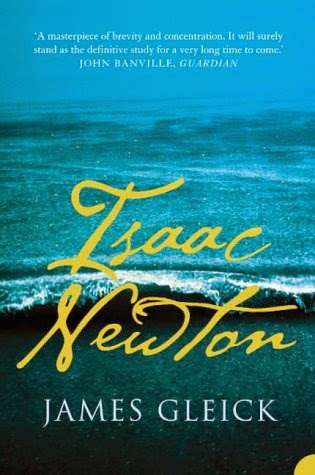 Isaac Newton's copious papers began to appear at auction houses in the early 20th century. By 1936 when interest had waned somewhat, a trunk went up for sale at Sotheby's containing manuscripts with some 3 million of Newton's words. John Maynard Keynes bought much of them, and helped to uncover an Isaac Newton that few had guessed at in the 2 hundred odd years since his death. The documents inside helped expose Newton "the alchemist; the heretical theologian" rather than the rational, mechanical scientist of tradition.

The great strength of James Gleick's short biography is that it helps us understand the whole Newton. Both the man who hide away from the world, jealously guarding his knowledge and discovery, almost fearing to publish, but who made enormous breakthroughs in mathematics and physics and the Newton who spent much of his life trying to work out how to turn base metal into gold; rigorously studied the Bible to convince himself that the question of the theological Trinity was a "fraud" and engaged in long protracted polemics and feuds with other great thinkers.

Indeed, Gleick's description of Newton's approach to theological questions demonstrates Newton's scientific method. Newton "compared the Scriptures in the new English translation [of the Bible] and in the ancient languages; he collected Bibles in Latin, Greek, Hebrew and French. He sought out and mastered the writings of the early fathers of the church." Newton tested his ideas, searched for evidence and examined it until he could come to his own conclusions. In this case, his conclusion was heretical, without a special dispensation from the king he would never have been able to take his mathematics seat at Cambridge because Newton couldn't bring himself to take the holy orders required. When he got the dispensation, he didn't move on, rather he "perfected his heresy through decade of his life and millions of words."

Newton wanted to understand the universe, and god was part of that. As Gleick explains, "if we could decipher the prophecies and the messages, we would know a God of order, not chaos; of laws, not confusion. Newton plumbed both nature and history to find out God's plan. He rarely attended church."

Gleick's book looks at this aspect of Newton's life but doesn't neglect the more well known parts. His invention of calculus, which he hide from the world for decades, until his feud with Liebniz. His work on tides, which apparently he did from first principles, without ever seeing the sea. His discoveries in optics, and most of all, his work on gravitational attraction. Newton wrote millions of words on these topics, from his earliest years he was an obsessive list maker, note taker, writer and doodler. His brain seems to have been on fire constantly. His fame came late. But when it did, Newton seized it, protected it and fought those who challenged him. Newton ended up very rich, heirless and world renowned even if, for much of his life, words or notation did not yet exist for the ideas he was inventing and the thoughts he was having.

Yet for all its strength, this book didn't feel adequate. I enjoyed reading it, in fact this is the second time I've done so. James Gleick peppers the book with literary quotes, poetry and Newton's own words. But it is too short, and I didn't feel like I'd got to understand Newton, merely that I'd been introduced to him and his ideas and I needed a deeper, longer biography. Nevertheless this is an excellent place to start.