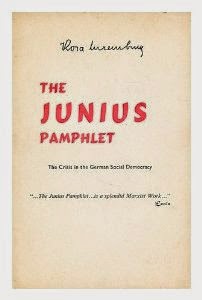 Rosa Luxemburg's Junius Pamphlet was written between February and April 1915 while the author was imprisoned for her anti-war agitation. It was smuggled out, but not published, Luxemburg finding it on her desk when she was released in January 1916. The pamphlet is an extraordinarily powerful work. It begins by describing how quickly the scene has been transformed, from the wild joy and celebration at the outbreak of war, to the sullen acceptance at the slaughter in the trenches a few months later. And as the soldiers die in their thousands, companies make fortunes from providing the food, clothing and weapons for the war "while profits are springing, like weeds, from the fields of the dead".

But this is much more than an anti-war pamphlet in which Rosa Luxemburg does two things. She tries to explain the origins of the war, describing in detail the Imperialist system but also why German Social Democracy, the most powerful and developed socialist organisation of workers in the world surrendered so readily at the outbreak of hostilities.

Luxemburg warns that the world has changed, there is no return to the pre-war situation for socialists and revolutionaries. Interestingly, this is very similar to Lenin's position taken around the Zimmerwald conferences.

"It is a foolish delusion to believe that we need to only live through the war, as a rabbit hides under the bush to await the end of a thunderstorm, to trot merrily off in his old accustomed gait when all is over. The world war has changed the condition of our struggle, and has changed us most of all."

Luxemburg traces the origins of the war in the development of capitalism. Much like Lenin and Bukharin used the outbreak of the war to clarify their understanding of Imperialism, Luxemburg's Junius Pamphlet explains the logic of imperialism through analysing Germany's historic development. In particular she notes the importance of "two naval bills" which promote a different era of politics, a "change from Bismarckian continental policies to 'Welt Politik'." She notes that once the decision was made to build and expand a German navy, war was inevitable, "The naval bill of December 11, 1899 was a declaration of war by Germany, which England answered on August 4, 1914."

But Luxemburg's analsysis is more than a simple argument that Germany was competing with England for markets and resources,

"It should be noted that this fight for naval supremacy had nothing in common with the economic rivalry for the world market.... Side by side with England, one nation after another had stepped into the world market, capitalism developed automatically, and with gigantic strides, into world economy."

Britain and Germany were, Luxemburg argues, interdependent, but

"When Germany unfolded its banner of naval power and world policies it announced the desire for new and far reaching conquest in the world by German imperialism... Naval building and military armaments becmae the glorious business of Germany industry, opening up a boundless prospect for further operations by trust and bank capital in the whole wide world."

Luxemburg analyses this linking up between state and capital through he study of Turkey in which Germany had poured large amounts of investment into in the later half of the 19th century. The German banks loaning money to build harbours and railways, tying Turkey's exports into German companies and forcing the countryside to pay rent for the privilege of this development, since industry was not advanced enough to pay the debt.

Luxemburg's understanding of the development of late capitalism rested on the way that the advanced capitalist nations required the under-developed world to absorb surplus value. It's a position that has been critiqued since by other Marxists. However it is not a major flaw in this work which seeks to try and understand the origins of the world war within a clash of states fighting to carve up the world in the interests of their home-grown capital. 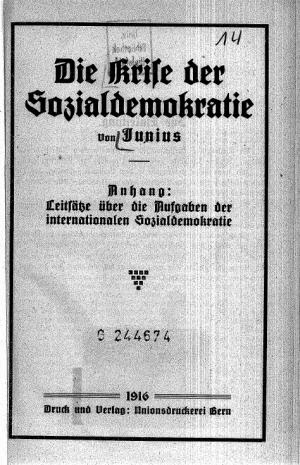 The second half of this book is a polemic deployed against the arguments of German social democracy in their support for the war. Luxemburg tackles these positions powerfully, showing how the leaders of the socialist left use half-remembered quotes from Marx and Engels to argue that their was a duty to fight Tsarist Russia. But in doing so, they undermine and set back the growing Russian working class movement. The world of Imperialism is very different from the world of 19th century Europe when Russia could be considered the prison house of nations.

The betrayal of German socialist movement (and indeed that of most of Europe) still has the power to shock. Knowing now what we know of the Somme, Verdun and the rest of the slaughter is to view the betrayal with hindsight. But even in the first weeks of the war, Luxemburg understood how rotten German socialism had become. Take this quote from a newspaper of the German SPD. Note that this was an organisation that still claimed the inheritance of Marx and Engels.

“As for us, we are convinced that our labour unionists can do more than deal out blows. Modern mass armies have by no means simplified the work of their generals. It is practically impossible to move forward large troop divisions in close marching order under the deadly fire of modern artillery. Ranks must be carefully widened, must be more accurately controlled. Modern warfare requires discipline and clearness of vision not only in the divisions but in every individual soldier. The war will show how vastly human material has been improved by the educational work of the labour unions, how well their activity will serve the nation in these times of awful stress. The Russian and the French soldier may be capable of marvellous deeds of bravery. But in cool, collected consideration none will surpass the German labour unionists. Then too, many of our organised workers know the ways and byways of the borderland as well as they know their own pockets, and not a few of them are accomplished linguists. The Prussian advance in 1866 has been termed a schoolmasters’ victory. This will be a victory of labour union leaders”

It is no surprise then, that the Junius Pamphlet ends with a call for revolution. Though Luxemburg, unlike Lenin, avoids calling for the defeat of her own ruling class. Instead calling for neither victory nor defeat. While the difference is slight, it perhaps reflects the different emphasis of the two revolutionaries, as well as their different experience of reformist socialist organisation. Luxemburg writes that

"For war as such, whatever its military outcome may be, is the greatest conceivable defeat of the cause of the European proletariat. The overthrow of war and the speedy forcing of peace, but the international revolutionary action of the proletariat, alone can bring it to the only possible victory."

While praising the book, Lenin critiqued a number of aspects of the Junius Pamphlet in a review which all readers of the booklet should also read. In particular he noted that "Junius" (he wasn't aware of the real identity of the author) abandons internationalism in favour of a "national programme" when suggesting how revolutionaries should have acted in 1914. Lenin argues that the problem is that the author hasn't broken completely from the old organisation.

"Junius has not completely rid himself of the “environment” of the German Social-Democrats, even the Lefts, who are afraid of a split, who are afraid to follow revolutionary slogans to their logical conclusions. This is a mistaken fear, and the Left Social-Democrats of Germany must and will rid themselves of it. They will do so in the course of the struggle against the social-chauvinists."

This meant that "Junius" panders to their politics.

"Secondly, Junius apparently wanted to achieve something in the nature of the Menshevik “theory of stages,” of sad memory; he wanted to begin to carry out the revolutionary programme from the end that is “more suitable,” “more popular” and more acceptable to the petty-bourgeoisie. It is something like the plan “to outwit history,” to outwit the philistines. He seems to say: surely, nobody would oppose a better way of defending the real fatherland; that real fatherland is the Great German Republic, and the best defence is a militia, a permanent parliament, etc. Once it was accepted, that programme would automatically lead to the next stage-to the socialist revolution."

In other words, Lenin thought that "Junius" was influenced by the very pressures that had set the SPD down the road of supporting the war in the first place, i.e. the concerns about being pushed outside of the legal methods of operating for socialists, fear of losing parliamentary influence etc.

Lenin's had of course spotted Luxemburg's greatest mistake. For all her brilliance, she hadn't yet broken with the errors of the old SPD. - though she was on that road with the call for a "New International". Lenin finishes his review with this point.

"Probably, it was reasoning of this kind that consciously or semi-consciously determined Junius’ tactics. Needless to say, such reasoning is fallacious, Junius’ pamphlet conjures up in our mind the picture of a lone man who has no comrades in an illegal organisation accustomed to thinking out revolutionary slogans to their conclusion and systematically educating the masses in their spirit. But this shortcoming—it would be a grave error to forget this-is not Junius’ personal failing, but the result of the weakness of all the German Lefts, who have become entangled in the vile net of Kautskyist hypocrisy, pedantry and “friendliness” towards the opportunists. Junius’ adherents have managed in spite of their isolation to begin the publication of illegal leaflets and to start the war against Kautskyism. They will succeed in going further along the right road."

In the Theses on the Tasks of International Social Democracy included with the Junius Pamphlet and adopted by Luxemburg and her comrades, the revolutionaries understand that the key task was to fight for the overthrow of capitalism. Their opportunity would come in November 1918 with the outbreak of the German Revolution.

Luxemburg - Reform or Revolution
Luxemburg - The Mass Strike
Sherry - Empire and Revolution: a Socialist History of World War One
Nation - War on War
Campbell - A Rebels' Guide to Rosa Luxemburg
Posted by Resolute Reader at 7:43 pm