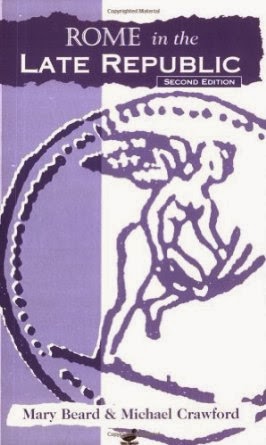 The end of the Roman Republic and the transition to the Imperial era is a fascinating period of cultural and social change, civil war, and political chaos. As the authors point out, in a "swift and striking transformation, a political system founded upon principles fundamentally opposed to monarchy was replaced by a system monarchical in all but name."

Precisely why this change happened is the subject of enormous debate and Mary Beard and Michael Crawford's book is one of the single best short introductions to the material that I have read. First published in 1985 this 2012 edition has a new introduction and supplementary material where the authors in general stand by their original arguments.

Perhaps the most important part of the authors' approach is the sense of the Roman Republic as a society in constant change and development. This is not a static society that suddenly goes into crisis, but a one were all sorts of individuals and social groups are in constant motion. Take the famous "turning point" of the tribunate of Tiberius Gracchus in 133 BC. Here a radical proposal to redistribute land to the landless poor was made by Tiberius. Unusually he made it to the popular assembly, instead of the Roman senate. Tiberius' method and his ideas brought murder upon him from other members of the governing elite, because

"By his use of the popular assembly, Tiberius gave that body the status of rival to the senate as a source.. of political authority.... the proposal concerning the Asian revenues [to finance redistribution of land] carried with it the implication that the people had some claim on the management of the fruits of the growing empire."

Elsewhere the authors argue that other factors in Roman society were changing, the "development... of moral and political philosophy in the late Republic, bringing with it new ways for the Roman governing class to understand and justify their own conduct." Rules of how Rome was to be governed, and by whom, became more codified, less reliant on custom, more on law.

Similar there was an explosion of culture (which "did not involve the poor or lower classes), though with the reign of Augustus, the authors suggest that this become less dynamic and tended towards a more uniform nature.

Key sections of the book look at social and cultural structures of Roman society. All of these in flux and changing - whether religious practice, or the closely related political process. All these changes were key to understanding what took place with the fall of the Republic. The authors argue hard that there is no single factor. Instead;

"The changes in late Republican society should not be seen just as the causes of the breakdown of the specifically Republican political system; they were also parts of the development of Roman society, which underwent no clean break between the 'fall' of the Republic and the 'advent' of Empire".

The problematic word "revolution" is always used in this context. The authors perhaps clarify this somewhat by pointing out there were two parts to the revolution. The first is the end of the republic, the second is the way that Augustus made himself the single ruler. That story is not part of this book, though it is illuminated by the material here.

This is an excellent short history, marred only by the unfortunate high price. Heavily footnoted and with an excellent summary of the material, it is a must for all students of the period. It is a history based on an attempt to clarify the different, and often competing parts, of Roman society and to understand how they related to each other. It also sees Rome as a evolving culture, whose development brought further, sometimes unexpected changes, that altered the interests and forces within society. Eventually the many internal contradictions broke through, and a new regime was needed, one that could solidify Roman society in its new form.