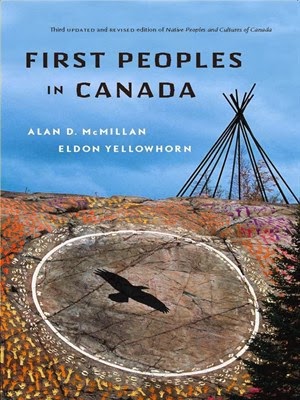 Perhaps the first thing that strikes readers of this history of the Canadian First Nations peoples, is the sheer variety of ways of life that existed before the arrival of Europeans. From the Arctic peoples who lived in extreme cold, hunted seals, fished and gathered very little food, to those living on the plains, hunting bison or engaging in farming and those living from the vast salmon runs of the West Coast, or hunting and gathering in the extensive forests of the east.

An extremely crude version of Canadian (indeed North American) aboriginal history would simply separate the periods into that pre-European arrival and then post-European time. Some First Nations people have their own version of this, the "Dog Days" versus the "Horse Days", remembering a time when positions were moved with the help of Dogs and then, after European's had introduced horses, a time when travel (as well as hunting) was changed.

But what this book demonstrates is that there is an enormously history of those who arrived in the Americas via the Bering land bridge some 12,000 years ago. They arrived in a "Terra Nullius", a land empty of people, but stocked full of flora and fauna. The authors discuss at length how the first people arrived - contrasting the tradition view of an overland crossing with a suggestion that many people would have travelled along the coast lines. Over the intervening time span, humans spread to every corner of the continent, and adapted to live in a myriad of different ways.

Over time, the aboriginal cultures developed and changed. Some died out, victims of hunger or conflict with other groups. This process accelerated as Europeans arrived, particularly as a result of the diseases that came with them, but also as a result of violence and war. Thus the societies that existing at the point of European contact were not ones that had been fixed for thousands of years. They were the result of the First Nations own history, a history that would have continued on its own path had it not been interrupted by European arrival.

Contact with the global economy transformed aboriginal life. In part the existence of metal tools, guns and horses had an immediate effect on life. But so did the particular nature of the relationship. Many Europeans on the west and east coasts wanted enormous quantities of furs or skins. Purchasing these from the native people, transformed those societies. Now they hunted not for food, or to satisfy needs, but to produce commodities for trade. In one case mentioned in the book, warfare took place that may have annihilated the St. Lawrence Iroquois, as a rival group the Stadaconans tried to monopolise trade with the French.

At the core of this book is a detailed examination of the changing life of different First Nations peoples. This is rooted in archaeology and anthropology, but also the culture and knowledge that we have from encounters with these people since European Contact. Indeed, each section begins with an extensive look at the history of the different groups, then finishes with a history of the time of European contact and finishes by bringing the history up-to-date by discussing the group's experience during the "global era".

I found this later part quite illuminating. The struggles of the First Nations people against the emerging nation state of Canada, were struggles for survival. They were also struggles to protect a heritage. Even in the 20th and 21st centuries, First Nations peoples continue to have to fight for their rights and compensation for how they were treated in the past. Even as late as the 1980s remnants of old Indian Acts several restricted the rights of "Indians" to move, to drink or to work. Much has changed, but much must still change. The First Nations people are not a living museum, they are a people with a rich history which continues to develop. The great strength of this book is to link that history to today, and present a continuity of struggle.

Posted by Resolute Reader at 4:08 pm