Utsa Patnaik & Sam Moyo - The Agrarian Question in the Neoliberal Era: Primitive Accumulation and the Peasantry 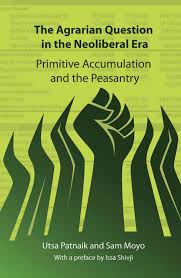 In the early 1970s, Walter Rodney wrote How Europe Underdeveloped Africa. His argument was that Europe had underdeveloped Africa in the interests of their own developing capitalist economies. Patnaik and Moyo's short book is a further development of this thesis. In particular though they argue that neoliberalism continues to make the Global South's agriculture subservient to the interests of the developed world.

The way that neoliberalism has opened up the economies of the developing world to the interests of capital is nothing new. From an agrarian point of view, neoliberalism has two major impacts - the removal of "price support mechanisms" that have helped peasants sell their goods in the face of cheaper commodities from other countries and secondly, a "sustained attack on peasant-owned or occupied land in the name of 'development'."

The case of India will help us understand what happens. After independence, the Indian agrarian economy "was protected for nearly 40 years and output of foodgrains per head slowly climbed back to 183kg per head by the early 1990s." Output per head had peaked at 200kg around 1900 and fallen to 136kg in 1946. But India was opened up to neoliberalism in 1991 and since then, the gain of the last forty years has been "wiped out". Consequences are shocking:

"No mass peasant suicides owing to debt took place before 1991 in India. Since 1996 as global primary prices fell and under the WTO discipline, protection has been virtually removed; indebtedness-driven farmer suicides started from 1998. Total recorded farmer suicides between 1998 and Dec 2008 were 198,000; specifically debt-driven suicides have claimed over 60,000 peasant lives over the last decade.

Neoliberalism has, in the interests of big capital, reconstructed the agrarian economies of countries like India. The authors argue that this is in order to fuel the continued accumulation of capital in the developed world.

"The entire thrust for free trade in agriculture, as promoted by the Bretton Woods institutions and through the WTO has as its primary aim the re-opening of the lands of the global South to meet the increasing demands of the North."

Controversially though, Utsa Patnaik in his opening essay argues that this is not new. Rather than an agricultural revolution in Europe fuelling the birth of capitalism, he says that agriculture proved inadequate to the task. While Enclosure and the Clearances laid the basis for the industrial workforce to enter the factories, it could not feed them.

"In 18th century England there may well have been a revolution in the social relations of production, but the resulting capitalistically organised agriculture showed little success in meeting the challenge of industrialisation from the point of view of raising the productivity of land and labour to the extent required."

Patnaik's detailed figures seem to show that yields in Europe did not grow enough to feed the industrial workforce and that these economies were then dependent on colonies for their cheap foodstuffs as well as markets. Africa, Asia and South America were thus refashioned in the interest of the needs of the developed world. This is part of a wider argument with those, such as Henry Bernstein, whom Paitnaik believes suggest that development of capitalism in poorer countries no longer requires the surpluses from domestic agriculture. On the contrary, Paitnaik suggests that it was never domestic agriculture that brought about capitalist transformation, rather a global exchange that relied on the higher yields obtained in colonial countries to fuel industrialisation, which in turn left the rest of the world underdeveloped.

Today the authors argue, little has changed. The reaction to the 2007/2008 food crisis was a "new scramble for land in Africa" to feed a price bubble in food and biofuels. Neoliberalism and the food crisis has also created a speculative bubble in land prices further impoverising and driving more peasants from the land. A process that Moyo refers to as a resuscitation of the land commodification agenda. Today, as Paitnaik argues,

"corporate subjugation of peasant production is nothing by the imperialist domination of our peasantry for the purpose of export production and it pauperises the peasantry and the labourers."

Contemporary land grabs and the dispossession of peasants from their lands are merely the latest stage in a process that began in England in the 17th century. But the peasantry of the Global South has "nowhere to go".


What is the alternative? Both authors argue that what is primarily needed is a break from the neoliberal agenda. This much is obvious and their book provides ample evidence for why this is necessary. Less clear is a longer term strategy. The ability of the state to subsidise sections of the economy and offer reforms is a key strategy. For instance, Moyo concludes that what is needed are:


"New regional integration strategies based on holistic agrarian reforms and aimed at collectively reversing the decline of domestic food production and food consumption, including protection from external shocks and dependency are crucial. These have to counter current market based functional regionalism by building a popular regional industrial policy framework that systematically reverses the current opening up of the region."

But this seems only to offer a more friendly version of capitalism on a localised level. While blunting the neoliberal axe may be a good thing, the problem for the people of the Global South as well as their counterparts in the North is an economic system that places them secondary to the pursuit of profit. While food sovereignty is a worthy aim, in and of itself it cannot protect the poorest sections of society against a system geared on the pursuit for profit. Ultimately capitalism, whether the neoliberal system, or more localised is built on exploitation.

State lead intervention to assist and develop the agrarian economy is needed. But what is more urgently needed is a movement from below that can challenge capitalism, in the North and the South and begin to create an agricultural system based on providing for need not profit.