G.E. & K.R. Fussell – The English Countryman: From Tudor Times to the Victorian Age 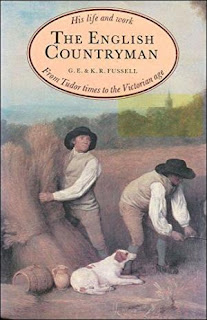 English rural life has been much romanticised over the years. One of the strengths of G.E and K.R. Fussell's 1955 book The English Countryman is that it doesn't romanticise the lives of those who laboured their lives in the fields of England. The shepherd for instance, idealised in the words of the authors “as if the season were always spring or summer, and his work little more than watching the gambols of the young lambs in the sunshine.”

Reality was very different. The Fussells point out that “this is all very nice, but it takes no note of wild work in the winter snow; living with the ewes when they were lambing in the cold early months of the year; of the long hours of sheep dipping, tarring and attending to feet against the rot; of the hours spent in changing fold hurdles; the dusty, often itchy, work of shearing.” Nor does it allow for the loneliness of the worker far from companionship.

Life was no better for those who worked from home. The ploughman in early Stuart times who began work at 4am, and retired to bed fourteen hours later.

While trying to portray the reality of country life, the Fussells also capture the great changes that have taken place over the four centuries that their work covers. The new ploughs and other equipment or crop rotations. Particularly important in this period was the introduction of clover and turnips to rejuvenate the soil, allowing uninterrupted growth of food (for man and beast).

There is also the social change. Here the Fussells bring a useful over-view to the great agricultural transformation that took place as England moved from feudalism to capitalism. Under the former, tenant farmers were expected to pay tithes for almost everything. The authors explain how in the 1650s:

...there were tithes of hay and corn and the tithe lambs were taken on St. Mark's Day. The tenth or seventh calf was taken when it was due and if not a tithe calf then a shoulder when the calf was killed. A halfpenny had to be paid at Martlemas (11th November) if it was weaned and if it was sold the tenth penny. The wool was tithed when it was sheared either by the tod or by the pound. Pigs were tithed when they were ready to eat “for odds the Vicar gave or took a halfpenny on pigs. He took up the tithe eggs on the Wednesday before Easter, two eggs for every hen or duck, three eggs for every cock or drake. Twopence must be paid for every communicant at Easter...

The list continues for fruits collected, vegetables grown and honey sold. This was in addition to labour that the rural peasants were expected to give to their lord. Capitalism introduced wage labour, though in many cases it seems that farm workers were then exploited far more.

Working for a wage meant only being paid for days worked. Unwanted workers were left frequently to starve. The market which seemed to offer much to those with land and capital also brought the crisis of boom and slump, hitting the countryside hard, but most particularly those without land, or capital.

Sadly this history of the lives of the English Countrymen contains little on their own struggles for social justice. The Tolpuddle Martyrs get a passing mention, but little is said of other rural struggles like Captain Swing or other examples of rural insurrection. Certainly nothing on resistance to Enclosure. In fact, the image we get from the authors is closer to the idealised history they set out to deny:

The farmer's men carried on as the farmer did. His lot was hard and his reward was minute, but love of the work was ingrained in both and one could not have kept going without the other.

In their brief discussion of the English Civil War they deny that the majority of the rural population was bothered at all, referring to the “hundreds of other villages all over the country that were equally placid because armed activity was sporadic and localized at different times during the campaign. Unrest there must have been, though many rustic people took no part in the fighting at all except when they tried to protect their own goods from one army of the other.”

This is to deny the throwing down of fences and opening up of enclosed lands that took place on a large scale, and was, at least initially, supported by Cromwell himself. Or those movements, such as the Diggers, who wanted to transform rural social relations.

To deny the class struggle in agricultural history is to misunderstand the dynamics of change in the countryside. Sadly then, this history of the English country person is missing a crucial element. It is a useful description of scientific and technological change, with interesting quotes and anecdotes that give one half of the story, but it misses a much bigger picture.
Posted by Resolute Reader at 8:22 pm

What a comprehensive insight into the forgooen work of the food providers of successive eras. Thank you