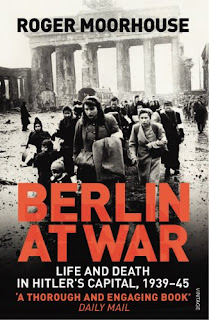 Roger Moorhouse's history of life in Berlin during World War Two is an exceptionally readable and detailed account of the lives of ordinary people during the war years. It by turns horrifying and inspiring, and it deserves to be read alongside other social histories of the conflict, in particular Angus Calder's Peoples' War with which it compares very favourably.

Moorhouse does not accept that the majority of ordinary Germans were complicit, or even supportive of the Nazi regime and its actions. Berlin, he argues, was not a city whose population was a "indoctrinated mass of Nazified automata, sleepwalking into catastrophe... Berlin was a city where minorities of active Nazis and active anti-Nazis flanked an ambivalent majority, who were often simply motivated by self-preservation, ambition and fear."

Berlin was not a strong city for the Nazis, even though it was their capital. It had never returned more than a third of its votes for the fascists and had a long history of left wing activism. Additionally:

the city was the natural home of the nation's elite and attracted a large number of intellectuals, lawyers and politicians, many of whom opposed the Nazi regime. Their opposition was in part political, but it was primarily based on higher ideals; on a fundamental objection to the regime's habit of riding roughshod over established legal and moral principles. As a result of these factors, Berlin gained a deserved reputation as a hotbed of resistance against the Nazi regime, with as many as 12,000 individuals involved in organised opposition.


Whether or not the presence of the "elite" helped create an anti-Nazi opposition during the war is debatable. Certainly the inspiring parts of this book are the accounts of the resistance that took place (on however small a scale) and those Berliners who protected or tried to protect Jews through the war. It is noticeable that for the most part it was not intellectuals and lawyers who did this, but working people (often from a left wing background). I was particularly struck by the story of a factory worker who caught the eye of a Jew she worked with and dropped her ID card near the woman at the end of her shift. Having an "Aryan's" ID card saved the woman's life, yet her saviour never once spoke or interacted with her. There are plenty of similar stories, though the horrific parts of the book deal in large part with those Jews who couldn't be saved.

Resistance took place on many levels. Indeed, the scale of the repression against those who spoke out meant that acts of resistance sometimes seem very minor, but involved enormous bravery. One example were the "Swing Kids" who danced to banned music in side rooms and toilets in music halls and fought the Hitler Youth who tried to stop them.

Moorhouse does describe one example of mass resistance, a protest by hundreds of non-Jewish women, whose Jewish husbands had been rounded up from their workplaces during the Nazis' Fabrik-Aktion. Their protests led to these men being released and even a couple being returned from Auschwitz. This is the only example of mass resistance that is known. But hundreds of people were involved in other acts. Moorhouse quotes a figure of 5-7000 for the number of Jews who went underground, each of them required the co-operation of an average of seven Germans to survive.

Some of the most fascinating parts of this book though, are the accounts of the lives of ordinary Berliners. In particular I was struck by how little enthusiasm the majority had for the war, their shock at the invasion of the Soviet Union and the way that air-raids took them completely by surprise. Even those who hated the Nazis seemed to believe the propaganda that the war would never reach them. For those who have read accounts of the Blitz or the German Occupation of France there are many parallels; the hunt for food, the stresses of rationing, the rumours and the hope that peace was around the corner.

Ian Kershaw's recent book The End looked in detail at the reasons that Germany kept fighting until the end. Its an excellent book which I reviewed here. Roger Moorhouse however looks at what kept the ordinary German going until the end of the war - how they survived and what they endured, as well as what some of them did to try and fight the Nazis. It's a powerful read, with some amazing photographs and I recommend it.

Kershaw - The End
Calder - The People's War: Britain 1939 - 1945
Sereny - Albert Speer: His Battle with the Truth
Cobb - Resistance: The French fight against the Nazis
Gildea - Marianne in Chains: Daily Life in the Heart of France during the German Occupation
Posted by Resolute Reader at 10:18 pm