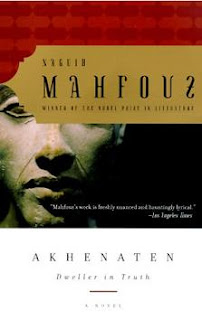 Novels set in the ancient world often suffer because the author feels obliged to describe the alien surroundings. We end up reading all about the buildings, the food, the sounds to the great detriment of the story.

Naguib Mahfouz's short novel of ancient Egypt is an exception. For Mahfouz, the story is the most important part and there are only the vaguest of descriptions. Ancient Egypt here comes across to us through the voices, ideas and religions of its inhabitants rather than an authors attempt to evoke the world.

But it is not just the style that makes this a unique book. The story is a series of interviews with prominent ancient Egyptians, all of whom are linked - through marriage, servitude, or blood to the Pharaoh Akhenaten. Historical Akhenaten, the father of King Tutankhamen, forcibly changed religious practises, pushing aside the old polytheistic beliefs and encouraging worship of a single god, Aten (or Ra). This caused enormous social and political problems and with Akhenaten's death Egypt only gradually returned to more normal religious practise. Much of the construction projects associated with Akhenaten were dismantled.

The novel centres on the turmoil created by Akhenaten's beliefs, in particular his visions of a single god. As he encourages the worship of this "One God", he preaches love over violence and revenge. But Egypt's bureaucratic and religious structures are too closely linked with the old ways and economic crisis, military invasion and rebellion threaten the whole order.

Akhenaten; Dweller in Truth centres on the series of interviews conducted by the scribe Meriamun with members of Akhenaten's court to attempt to understand what took place. Twenty years after the events, many of those involved find their stories shaped by their own contemporary interests, or a wish to portray themselves in a more favourable light. Conflicting accounts, rumour and propaganda come together to muddy the true story and the reader is left to sort out in their own mind, what really happened. This is a clever novel, its brevity hides a complex and powerful tale. A good book to while away a cold-autumn evening.

Graves - I, Claudius
Graves - Claudius the God
Posted by Resolute Reader at 11:17 am