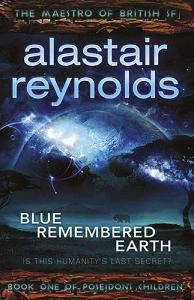 Alastair Reynolds specialises in writing large scale science fiction. Often his characters, and indeed story lines can seem dwarfed by the immense scale of the environment he is writing about. His stories cross galaxies, enormous spaces and long periods of time. In this context Blue Remembered Earth is very different. If I was to be someone optioning film rights of Reynolds' works I'd choose this one.

In a very different way from his previous writings, Blue Remembered Earth seems very much character driven. We begin with Geoffrey a scientist studying elephants in an Africa several centuries from today. Humans have survived the chaos of climate change, war and environmental disaster, though Earth has changed. Greenland exports fine Merlot wine and much of what was the industrialised, developed world of today has been overtaken by the powerful economies of Africa, India and China. Reynolds is brilliant at painting this new world, dominated by clean technology, space travel and colonies on the Moon and Mars.

The technology is very much the backdrop though to a personal story of Geoffrey and his Akinya family. The Akinya are fabulously wealthy. Their capitalist fingers in every pie, from space travel to genetics research. Their ageing matriarch has died and leaves behind a series of tantalising clues that takes Geoffrey back and forth across the solar system. Geoffrey, formally a man who wants nothing more than to study the brainwaves of his beloved elephants finds himself exploring our strange future.

Reynolds' future is surprisingly believable, though some of the concepts are a little mind numbing at times. The humans who alter themselves to become sea creatures, mermaids for instance and join the aquatic nations are one example. I also felt the evolving mechanical machines of Mars had a little of the Edgar R. Burroughs to it. These are minor problems though. What Reynolds does well is to link together the different character story lines, often taking place in widely different parts of the solar system to create a novel of humanity on the edge of a new era.