Mikhail Bulgakov - The Master and Margarita 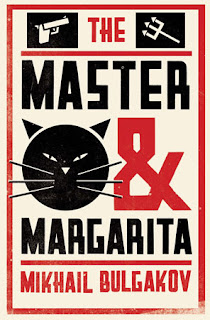 Begun in the late 1920s, finished in 1937 after the author burnt the first version and not published until 1966, The Master and Margarita is a classic of 20th century Russian writing. On one level, it is a fantastic fairy tail, full of witches on broomsticks, magic, talking animals and other unbelievable characters. On the other hand, it is a tale of redemption, a necessarily metaphorical tale that criticises 1930s Soviet life.

Bulgakov certainly had an interesting life, very much tied up with Russian history of the early 20th century. He was a young doctor in the First World War then worked in Ukraine during the Russian Revolution and Civil War. He doesn't seem to have been particularly political, as a biographical essay in this new edition of the novel points out, a contemporary poet "talked of his 'magnificent contempt of their [the Communists] ethos." His novels were of an earlier style. By the time Bulgakov gave up his medical career to concentrate on literature, in early 1920, the culture peaks of the very early revolutionary era had begun to give way to the leaden-headed time of the emerging Soviet bureaucracy. This was an era of shortages, starvation and civil war. Despite these shortages, as the 1920s progressed a new emerging class of bureaucrats and functionaries began to consolidate power. With the death of Lenin this class became even more entrenched around the figure of Stalin who turned his back on the "revolution from below" socialism of Lenin and the Bolsheviks and argued for "Socialism in one country".

By the time he begun The Master and the Margarita it would not have taken a genius to recognise that contemporary Soviet society was along way from the dreams of the early revolution. Much of the realities of this life are apparent in the novel. The stifling bureaucracy, the pompous functionaries who only serve to bolster their own roles and egos through endless regulations and paperwork. Much of the humour in the novel comes from the popping of these individual's self-importance.

The novel centres on the arrival in Moscow of Satan and his assistants. These fantastical characters proceed to create mayhem around the city. But rather than killing and hurting people, Satan's exploits the greed and selfishness of many of Moscow's inhabitants, in particular the literary types and low level functionaries. In the first of two wonderful scenes, Satan, in the guise of a stage conjurer causes a riot as greedy theatre goers are given enormous quantities of cash and beautiful, but fatally flawed, clothes.

Satan is here an ambiguous figure. His evil seems more directed at those whose greed and selfishness make them deserve some vengeance. He can also be helpful and rewarding as the principle characters, the eponymous Master and Margarita eventually find out.

These two form a parallel and intertwined story. The Master has written a novel, which in echoes of Bulgakov's own writing of the book, he has destroyed in frustration at the barriers erected by the literary establishment. The novel tells the true story of Jesus' trial and Crucifixion. Its own message carrying echoes of the more explicit attacks on those in positions of power. For much of the novel, the Master is in a lunatic asylum, joined as time passes, by many of those who encounter Satan's memorable band. In particular, the enormous black cat, that walks, talks and carries itself with enough bearing to fit in well with the newly enriched sections of the Moscow elite.

Margarita agrees to serve Satan and presides at a fantastic feast. The ball's guests are the most evil figures from history, and Margarita endures their company while absorbing their pain and suffering. An act of kindness on her part helps prove her purity and, passing an invisible test, Satan rewards her, and the Master.

The Master and Margarita is not an easy novel. It is full of historical and literal allusions and, presumably to escape the censors, much of the material is allegorical in nature. Bulgakov's brilliance is to make the extraordinary seem reasonable, as testified by Behemoth the giant cat. But while the book is clearly a powerful critique of Soviet society, it is also a fantasy that offers little alternative to the economic realities. The conclusion appears to be that things are as they are and cannot be changed, only escaped.

This new edition from Alma Classics is particularly useful for readers who are new to Russian literature and the period. In addition to the main text (which has had very useful footnotes added explaining many of the more obscure references and characters) there is a biographical essay, pictures of the author and his family and extracts from Bulgakov's personal correspondence. Rather oddly the publishers have also included the first few pages of the book in Russian. As a result the book has some very useful supporting material and will help the reader understand the writer, the period and the nature of the book. Whether it enables you to also get your head around the story is entirely a different question.
Posted by Resolute Reader at 9:38 pm

This is one of those books that I understood better on subsequent readings (of which I've now lost track). For me, the first reading left me wondering what the h I'd just read. I knew it was fantastical and deep, but didn't understand it very well; I felt I'd have to read it again to try to sort things out.

The last time I read it was last summer while in Moscow. By this reading I'd taken more Russian lessons, read more about life during Bulgakov's time, and traveled in the country. Despite this, I still feel I can only get a little of what Bulgakov was trying to say!

I've been told by people who've read it in both languages that a lot is lost in the translation, as English cannot represent what Russian can in linguistic literary terms. Naturally there is also a culture gap with Master & Margarita that takes time to bridge, but an understanding of the politics of the day gives the reader some assistance.

You've definitely got me wanting to read it again...once I've done some further side reading. Any chance you'd swap your copy with that amazing cover & added information for mine?

It's also a tremendous cover. Nice review, but it does sound challenging not so much in the surrealism as in the issues of understanding context. It's good this issue helps with that (though printing a few pages in Russian is a bit random).

Alma Classics is the new name for what used to be Oneworld Classics, and I've had very good experiences of their editions so I likely will pick this one up. Mostly I admit because of the additional materials which you flag.