Steve Jones - Darwin's Island: The Galapagos in the Garden of England 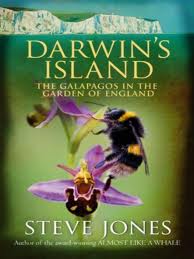 Charles Darwin's most famous book, indeed the only one that most people would be able to name, is The Origin of the Species. It is justifiably famous, a brilliant work that stunned and shook up the scientific world when it was first published. But Darwin was far more than a one book man, and many of his other books seem obscure, but when they were published they were also sensations. Darwin wrote extensively, but today is most remembered (aside from Origin) for his five year voyage. When he returned home from that trip, which took him aboard the Beagle to the Galapagos islands and South America, he never again left England. Yet for the remainder of his life his output was prodigious and varied.

Steve Jones' book is an examination of the rest of Darwin's work. Writing on everything from Barnacles, to sex, from pollination mechanisms in plants to the humble earthwork, Darwin's books broke new scientific territory with every publication. Darwin's method was far from the random, directionless work that this varied output might seem, in fact, his life can be seen as a scientific trajectory, his early work on barnacles for instance putting in place ideas and seeds that would bear fruit in later studies.

Darwin was also a careful and innovative experimenter. In his attempts to understand the importance of the earthworm in producing the fertile soil that agriculture depends upon, his experiments involved everything from the measurement of the rate at which waste materials were buried, the speed of subsidence of ancient monuments and, perhaps unbelievably, the playing of instruments at worms. Darwin and his son noted that earthworms appear to demonstrate a level of intelligence, pulling leaves into their burrows using the thinnest ends, rather than the wider parts. Jones calls this the "first real experiment on invertebrate psychology" and notes that the importance of Darwin's work on soil has laid the foundation for the science that must now deal with the worsening condition of planetary earth, degraded and depleted by centuries of agriculture.

Jones' looks at each of Darwin's works in turn, and this makes for a varied book. Darwin never seemed to go for short titles, his work on worms is called The Formation of Vegetable Mould, though the Action of Worms, with Observations of their Habits. Jones' own writing is good enough to make such a title seem an attractive prospect for the ordinary reader.

This is not a biography, though it contains much biographical information. Rather it is an exploration of Darwin's science. One of the interesting things that comes through, is the way that Victorian science was very much a multi-disciplinary subject. Earthworms were important for agriculture. Barnacles impacted on ships and their ability to conduct trade. Darwin's studies of the impact of marriage between cousin's had enormous social implications (Parliament refused to include questions about this type of marriage in their population census, despite Darwin's hopes, because Queen Victoria had married her cousin, and it was considered that it might insult her Royalness).

Jones' brings Darwin's books and science up to date. Surprisingly, Darwin's work is often considered a standard text today, but obviously science has moved on. Most importantly, genetic science and the understanding of DNA have allowed scientists to build dramatically on Darwin's early studies. This makes for a rounded book, that looks backward as well as forward. It is also full of fascinating anecdotes and information (who knew that all the apples we eat today are the descendants of just two trees in Kazakhstan?).

Science today seems a very narrow collection of disciplines. Scientists spend their lives studying a narrow portion of even their own subjects. Steve Jones' book reminds us that true science should be about understanding the inter-relation of subjects and ideas. Darwin's genius was to lay the foundations of many areas of study. His work continues to inspire today, and Jones' book is an excellent introduction to some of the more obscure and forgotten parts of that work.

What I always found interesting about Darwin was that despite an earlier in life obsession with beetles, he spent 7 years instead studying barnacles in depth. Was it because everything about beetles was known at that time? I cannot remember. My other favourite Darwin science anecdote was when he was studying birds in depth and, through the scientific grapevine of the day, received from Alfred Russel Wallace a bird from Malaysia. Apparently Wallace had tossed it in with a shipment he was sending to his benefactors in London with a note that it should be sent to Darwin as he "might find it useful for his research".

I'll be adding this one to the tbr list for sure.