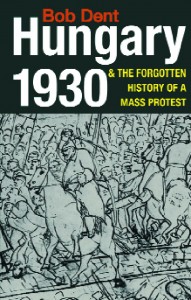 The history of working class struggles are rarely recorded and frequently are written out of mainstream history altogether. It rarely suits the needs of the ruling class to record in detail the trials of working people fighting to improve their conditions and win rights.

Bob Dent's new book is an attempt to rectify one of these omissions. Unusually, he concentrates on the events of a single day in Hungarian history, a mass protest that took place on 1st September 1930. The demonstration itself is the core of the book and Dent has raided the archives of contemporary newspapers, police reports and memoires to build up a picture of what happened. However the author has also put the demonstration into the wider context of Hungarian history and most interestingly he then demonstrates the way that the events themselves become the tools of Hungarian rulers over the next decades.

By 1930 Hungary, like most of the world, was in the grip of economic crisis. Rising unemployment and falling wages were the norm. The demonstration on 1st September was not the only event to protest this. Dent documents a number of large strikes and smaller protests. Indeed, Dent describes the period from January to September 1930 as "eight hot months". But the Hungarian government was ruthlessly opposed to giving working class organisations more opportunities to protest, and they certainly weren't giving to generous aid for the unemployed and poor.

The demonstration that is the centrepiece of this book was called by the Social Democratic Party (SDP). The SDP was a significant organisation with a number of daily newspapers and several MPs, though it was thoroughly reformist and while prepared to urge action by workers this was mostly to strengthen its own hand in parliament. In February 1930 for instance the organisations newspaper Népszava urged "Rise up comrades for the struggle! Long live social democracy", but as Dent points out "all that was being proposed was that in the next few days SDP members of parliament would make a concerted effort to raise questions in parliament concerning the unemployment situation".

Nonetheless, the SDP did call the demonstration on 1st September. Under the slogan "Work and Bread" everyone was amazed at a turnout that may have been 100,000 people. The authorities were concerned about the potential for trouble and tried to ban the march which meant that the SDP urged supporters to walk on the pavements so as to avoid provoking the police.

The Hungarian police were not afraid to use extreme violence against workers and the unemployed. The 1st September was no exception and it seems likely that senior officers were waiting for the right opportunity. Veteran protesters reading this will not be surprised that the accounts in the mainstream press of the protest that Dent has unearthed, differ widely from the experience of those taking part and of the left newspapers. Népszava described the protest as "The great battle between bread and the police sword" but argued that the trouble was caused by "a few Bolsheviks" provoking the police. This seems unlikely as according to Dent membership of the Hungarian Communist Party despite the revolutionary period in the immediate aftermath of World War I, had fallen to a small rump. Repression and disillusionment with the Soviet Union meant that only a few hundred people were members. The CP were in no position to influence the demonstration as the police, the SDP and later official Communist historians were to claim.

The repression was brutal. Swords and revolvers wounded many and one young man, János Darnyik, was killed by a bullet. Dent examines the little we know about Darnyik, showing again how his death and his family were exploited by later Communist governments to bolster their own positions and re-write history.

The concluding chapter puts the demonstration into the context of Hungary's history since 1930. In particular it discusses the re-writing of history that took place. Later Communist governments were keen to link their organisation to the demonstration, at various times claiming Darnyik as one of their own members and arguing that without Communist Party members the protests would never have taken on the militancy that they did. Because Dent puts events in the context of the times; it is clear that the size of the demonstration and any workers militancy arose, not from the small CP, but rather from the reality of poverty, hunger and unemployment. While the SDP wanted to use the protest to strengthen their hand in parliament, from their point of view there was always the risk that things would get out of hand.

Sadly it doesn't seem that the protest led to a further strengthening of workers' confidence to fight the economic conditions. Dent shows how the CP too failed to grow, despite excellent objective circumstances, due to their sectarian politics that claimed that the social democrats were as bad as fascists. This is very similar to problems experienced in the 1930s by the American CP (see my review of Fightback here). Sadly within a few years far-right and fascist organisations grew in Hungary and eventually a deal was reached with Hitler that drew the country into war. It is notable though that workers did fight, even into the 1940s when Hungary was still neutral but no movement developed strong enough to stop Hungary entering the war.

Bob Dent's short book is a good introduction to a forgotten period of working class history. It is also a good primer for the history of a country that few people in Britain will know. I hope that it is read widely, particularly in Hungary where the far-right continue to make gains today to remind people of the brave history of the workers' movement.