Gitta Sereny - Into That Darkness: From Mercy Killing to Mass Murder 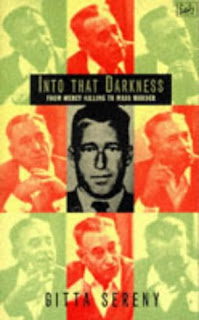 Gitta Sereny's book on the life of Albert Speer is one of the best biographies I've read. Meticulously detailed, researched and challenging to subject and reader it deserves to be read by everyone interested in the Second World War and the causes of the Holocaust.

Into That Darkness is an earlier work of hers. Her subject in this case, Franz Stangl, was the commander at the Treblinka Death Camp, were up to 900,000 Jews and an undetermined number of Gypsies were murdered. Unlike the case of Speer though, Stangl is not as fascinating character, while clearly a deeply troubled individual, he was not the gleeful and unrepentant killer like Eichmann. Nor was he a senior figure in the regime, close to other leading Nazis, with personal acquaintances like Hitler.

As a result, this study of Stangl is an attempt to grapple with a question that has been the subject for intense debate amongst historians of the Holocaust. How did seemingly "ordinary men", become the perpetrators of such appalling acts of violence. In Stangl's case it seems that rather than him being a particularly virulent anti-semite before the rise of Hitler, or even an enthusiastic sympathiser of the Nazi Party (he did retrospectively join the organisation and give up his faith) when the Nazis invaded his Austrian homeland, he was a fairly ordinary police officer who rose to the top of his organisation precisely because he was able to administer and organise the Death Camps, while ignoring events around him.

At the same time, the book is also the story of those who went to the gas chambers in Treblinka, and those who fought back, in particular the mass uprising that eventually forced the camp to close.

The parts of the book where Sereny explains and documents the industrial slaughter that took place at the two camps organised by Stangl (he was at Sobibor before he was redeployed to Treblinka) can only be described as horrible. But  equally appalling are those were she discusses the slaughter with Stangl, who is dispassionately removed from the murder. On his arrival at Treblinka he is more concerned and appalled by the disorganisation, rather than the realisation that mass murder is taking place.

Survivors from Treblinka differ in their accounts of his involvement in murder. Most seem to think that he limited himself to organisation matters, rarely talking to those arriving in the transports. At least one eyewitness claimed that Stangl (who always met each new train, immaculately dressed in a white riding suite) carried a whip, like many of the most brutal of guards.

Stangl's inability to feel remorse is notable throughout Sereny's interview, which took place. Here for instance is his own, dispassionate account of a camp worker (Blau) who approached him trying to save a relative.

"There was one day when [Blau] knocked at the door of my office... and asked permission to speak to me. He looked very worried. I said, 'Of course Blau, come on in. What's worrying you?' He said it was his eighty-year-old father; he'd arrived on that morning's transport. Was there anything I could do. I said, 'Really, Blau, you must understand it's impossible. A man of eighty...' He said quickly that he understood of course. But could he ask me for permission to take his father to the Lazarett rather than the gas chambers. And could he take his father first to the kitchen and give him a meal. I said, 'You go and do what you think best, Blau. Officially I don't know anything, but unofficially you can tell the Kapo I said it was all right.' In the afternoon, when I came back to my office, he was waiting for me. He had tears in his eyes. He stood to attention and said, '... I want to thank you. I gave my father a meal. And I've just taken him to the Lazarett - it's all over. Thank you very much.' I said, 'Well Blau, there's no need to thank me, but of course if you want to thank me, you may.'"

Blau, it should be noted was an informer, one of a number of Jewish inmates at Treblinka who co-operated with the system. No doubt this was his special reward. Others at Treblinka worked for the Nazis, but not as collaborators, as workers who helped, on pain of death, keep the machine running. Theirs was a daily struggle for life, and it was them, who after months of threats, torture, violence and death organised the revolt that helped bring Treblinka's to a close. Their uprising is one of the other stories in this book, in fact the story of those who lived, worked and died at Treblinka is the real story. Sereny's insightful examination of Stangl paints his banality as part of a wide machine of slaughter. But he was only a cog (though a very important one) in that machine.

Sereny's book then is much more than a biography of a commander of a Death Camp. It is also an examination of the whole structure of the Nazi death camps and an insight into what happened there. Her interviews with survivors, eyewitnesses (such as the Polish resistance member who worked on the railways and counted every train into Treblinka and noted the numbers inside - coming to a higher total of 1,200,000 - a third more than the official figure) and Stangl's colleagues, illuminate the Holocaust. But centrepiece are the stories of the survivors. These people suffered appalling, yet still managed to keep the flame of resistance alive. The tale of their successful revolt and the enormous sacrifices made by them to allow others to escape, makes this book well worth reading.

In an attempt to frame events at Treblinka and Stangls own actions, Sereny examines several aspects of German and Austrian life before and during the war. Some of this, such as the stories of those who sheltered Jews and others in their homes, nunneries or monasteries are well know. Others, such as the role of the church are discussed here in detail because of the importance of those bodies to people like the Stangl. Sereny is particularly critical, though always objective in her examination of the evidence, of the role of senior figures in the Catholic Church. She argues convincingly that the failure of the Pope to explicitly condemn the murder and violence taking place, was rooted in antisemitism, but also the Pope's hostility to Soviet Russia. For the Pope, better a Nazi Germany that committed mass murder than a Soviet Europe. Sereny is careful to point out that many lower figures in the Church did not fail this test, sheltering and protecting Jews for the whole war at considerable risk to themselves.

Sereny also makes it clear the extent to which the Holocaust was known. For Frau Stangl, rumours of life in places like Treblinka made her question what her husband was doing. But governments in the US and Britain as well as elsewhere in Europe had ample evidence as early as mid-1942 about the slaughter. Sereny argues convincingly that the decisions they took increased the numbers of victims through failure to offer refuge, or support aid efforts by other countries.

At the end of the war, despite being aware of who he was, Stangl was able to easily escape from his open prison. It is perhaps a reflection of his lack of engagement with his own crimes that he lived openly under his own name in Brazil even registering with the Austrian authorities. His own wife left their home country to see him, declaring her purpose of travel as to meet her "escaped" husband.

Eventually Nazi hunters like Simon Wisenthal forced the Allies to bring Stangl to justice. He was sentenced to life, but died immediately after Sereny's interviews. The failure of the Allies to deal with Stangl properly is in itself a tragic crime. Few individuals come out of this book well and Sereny has done us an amazing service by bringing all this evidence and analysis together.

I want to finish with the words of Richard Glazar of one of the survivors that Sereny interviewed. The revolt that he helped organise at Treblinka is one of the few bright moments in this horrific tale. It shows that even in the darkest times, people sometimes are able to fight back against brutality, repression and racism. Sereny's book is a monument to them, and educates us all on the importance of the struggle to prevent fascism rising again.

"No one at all could have got out of Treblinka if it hadn't been for the real heroes: those who, having lost their wives and children, elected to fight it out so as to give the others a chance. Galewski - the 'camp elder'; Kapo Kurland who had worked in one of the most tragic places in this tragic place, an extraordinary man and the senior member of the revolutionary committee, to whom we prisoners swore an oath on the eve of the uprising.

Sidowicz and Simcha from the carpentry shop; Stnda Lichtbalu one of our Cazech group... who worked in the garage and blew it up with the petrol tanks - the biggest, most important fire of the uprising, he died in it. And of course, Chelo Bloch who survived 4 hellish months to lead the revolt in the upper camp and died in it.

And finally Rudi Masarek; tall blond Rudi who of all the men in Treblinka would have had the best change of getting away; he looked more German than the most 'Aryan' of the SS... He had his mother in Czechoslovakia and could have gone back... to a life of ease and plenty. He came to Treblinka deliberately, because he loved someone else more than himself. He died, deliberately, for us."

Sereny - Albert Speer: His Battle with the Truth
Kershaw - The End
Black - IBM and the Holocaust
Posted by Resolute Reader at 8:49 pm