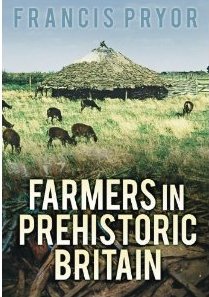 Much of what is known about early, or ancient farming is the subject of informed conjecture. Because anthropologists have been able to study contemporary communities, the lives of pre-agricultural hunter-gatherer societies is fairly well understood, at least in generalities. But because agricultural communities have, over time, developed or adopted improved techniques and technologies, we don't necessarily understand much about how the earliest farmers lived and worked the land. Indeed as Francis Pryor points out farming may have been through various historical stages, it is also very much dependent on the landscape and area in which it is practised. Farming on the British Isles, off the coast of Western Europe in 3500 BCE was very different to farming life in the fertile crescent when wheat was first domesticated.

Farmers in Prehistoric Britain is a short, but important work that tries to understand a small part of ancient farming history. Pryor concentrates on the areas of his expertise, in particular the Flag Fen site near Peterbourgh which Pryor has been the principle excavator and publicist for over the years. Perhaps uniquely for archaeologists, Pryor is also a practising farmer. Since his early work at Flag Fen he has refined his understanding of ancient agriculture, because he has learnt how to breed sheep and cattle. His life in a farming community has produced insights into the way that agriculture could have been.

This doesn't always follow. For instance, being an astronomer in the 21st century does not necessarily give an insight into the life of Galileo contemplating the heavens under a regime that was noted for disliking heresy. Farming is different in many ways, as despite technological advances, insights into the behaviour of (say) sheep when confronted by a sheepdog for the first time, are likely to be similar to those for ancient shepherds. In a couple of cases here, Pryor describes how he only recognised certain features of Bronze Age farms as a result of his own use of drove-ways to separate sheep as part of the annual cycle of the farm.

Much of what Pryor argues about the practise and life of ancient farmers is linked with his wider themes, that appear in most of his other books, of ancient ritual landscapes. These he argues mean that ancient people considered themselves part of a much wider use of land and Pryor extends this analogy to some of the buildings and sites he discusses – a separation existed between (say) locations devoted to life and burial, but they were intimately linked.

The nascent nature of agricultural remains is a significant problem for those studying ancient agriculture. Pryor spends sometime explaining why hedges don't leave traces for instance, and so much of this book is devoted to some detailed discussion of the practice of archaeology in this context. I found some of this a little complicated, but readers who work in the field will no doubt find it useful and illuminating.

I want to finish this review by quoting a couple of the conclusions of the book, because they are quite amazing. Firstly, Pryor argues that livestock farming was the “dominant form of farming in Britain between, say, 4500 and 600 BC”. This is important because most people when discussing agriculture probably imagine fields of wheat. Pryor is at pains to point out that this was unlikely, despite “intensive” farming, the production of foods (at least in the British Isles until the Iron Age) such as wheat was likely to have been done on small plots. Cattle and sheep rearing was the large scale agriculture of this era of British farming. For instance, he argues that the agricultural visible parts of Flag Fen supported a population of 2000-3000 sheep. This is large scale farming, that needed (and could support) a big human population, as well as a wider infrastructure to use and distribute the wool, hides and meat.

The “millennium or so of intensive livestock farming in large parts of lowland Britain” described by Pryor lead to a “Bronze Age bonanza”. Overtime, population increases and the gradual improvement of farm techniques meant that eventually, the “population of animals suddenly passed a critical threshold and it became necessary to parcel-up the landscape more formally”. This began a very different era of farming and society for Bronze Age people. Over the millennia described here, the countryside of England was transformed. From a wooded landscape to a artificial one, hunter-gatherer, neolithic and Bronze Age men and women fundamentally altered and started to create the world we live in today. Pryor's book is a good introduction to these changes and the mechanics of how ancient farmers albeit in a small part of the world, may well have practiced their daily lives.

Note that this book is out of print, but can be found in various second hand sources. Parts of it are explored in more detail in several of Pryor's other works. I'd particularly recommend Britain BC and Seahenge for this and other material.