Lloyd Biggle, Jr - All the Colours of Darkness 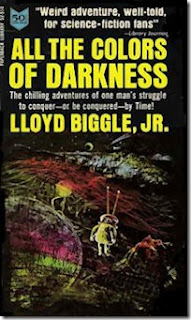 On of the fascinating things about reading science fiction is the way that, despite deploying fantastical ideas, it dates so rapidly. Nonetheless, well written SF can still be immensely readable, decades later, despite its technological limitations.

That certainly is true of Wilson Tucker's The Long Loud Silence that I reviewed recently. Sadly it's not as true of Lloyd Biggle's All the Colours of Darkness which was written in 1963. This novel deals with the invention of a teleporting system and uniquely perhaps, the technological angle works really well, despite the book being half a century old.

The Universal Transmitting Company's breakthrough stands to make its directors' fortunes. Step into a booth in Manhattan and instantaneously you arrive at your destination, anywhere in the world. While hinting at the consequences for the freight, railroad and airline industries, AtCoD mostly concentrates on a detective plot around this technological marvel. On the first day of operation, several "passengers" go missing, but these persons have no public records, no relatives and no one, but the teleport operators, notice their passing. Our hero, is detailed to find them.

Despite owning the book for a couple of decades, I hadn't realised that detective Jan Darzek is a character in a whole series of novels, I doubt I'll look them out, because once the reader has exhausted the possibility of teleportation as a plot device, this is fairly mundane stuff. It is true that Biggles does well with the mystery of the unknown (aliens are, unsurprisingly involved) and there is a final treat at the end of the book. Biggles finishes the novel by posing his hero a major personal dilemia. Smacking slightly of those episodes of Star Trek that featured "Q", this raises the story a little above others of its genre.
Posted by Resolute Reader at 3:49 pm