Francis Pryor - Seahenge: A Quest for Life and Death in Bronze Age Britain 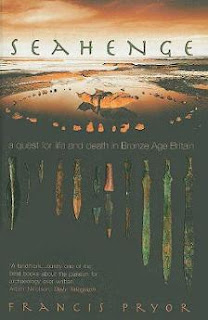 Readers may remember the excitement near the end of 1999 when a wooden circle was discovered on a Norfolk beach. Surrounding a central, uprooted tree stump, a circle of timber looked like a wooden Stonehenge. Quickly the media dubbed it Seahenge and the name has stuck. This irritates some students of archaeology, as the circle is not a henge in the sense that Stonehenge is. Rather the timber circle was actually made of planks, touching to form a continuous wall. It's only after thousands of years of action from water that we see the timber reduced to stumps, and the appearance of a henge.

Francis Pryor's book is much more than an exploration of what Seahenge was, and what it was for. It is a deep, semi-autobiographical trawl through the way that studies of the Bronze Age have changed during the last hundred years. Pryor is now one of the foremost archaeologists of the Bronze Age, and he has helped over see a changing view of the way that the people of that era lived, worshipped, farmed and died.

This book begins with Seahenge, but rapidly looks at a number of sites that Pryor has concentrated on. In particular, the Flag Fen site near Peterborough, which Pryor has been instrumental in excavating, exploring and bringing to the attention of the public. As he discusses his involvement with these sites, he teaches the reader how he, looks at the Bronze Age landscape. For Pryor, it is not enough to look at a site or a find in isolation, you have to understand it in the context of the wider world of the people who lived there, or buried the item in the ground. This means looking at the importance of boundaries, roads, paths and the edges of water. Pryor shows us how Bronze Age people might have seen the world around them, based on the layout of their farms and the positions of their buildings. His archaeological research is practical, and his statements, while they occasionally border on whimsy, frequently are based on experience. Pryor knows that you can't have a central chimney on a Bronze Age round house, because he's tried it and had to flee the recreation as it filled with dense smoke. Pryor begins with Seahenge, but he finishes there too. You cannot explain Seahenge without understanding the wider Bronze Age experience, and this is one of the reasons that the book is so strong - the author is giving us the intellectual basis to understand Seahenge. You cannot explain a monument (if that is the right word) like this, without this. It would be like trying to sum up the Magna Carta, or Karl Marx's thought in a single sentence. 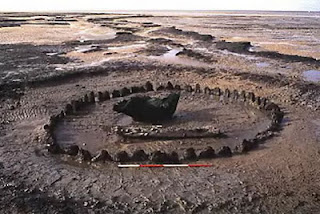 This is a practical book, in the sense that Pryor is a hands on writer. He talks as he works, we learn the detail of how to excavate a trench. One of the things I particularly like is the way that Pryor never forgets everyone who is involved in a dig. From the driver of the JCB to the people who work the metal detectors, Pryor sees archaeology as a collective effort, a democratic one too, if his descriptions of the working meetings are anything to go by. This is reflected in Pryor's own view of history:

"At the end of the second season in 1972 I gave a paper at a conference in Newcastle, in which I described the emerging picture of well-regulated life in the Bronze Age. No sooner had I stepped down from the stage than half a dozen academics declared that such order and organisation could only be due to the presence of a powerful political elite, who controlled those otherwise unruly prehistoric Fen folk. I don't know why, but this assumption irritated me. Why couldn't they control the way they behaved themselves? Why do some always have to look for a ruling class, just because ordinary people seem to be running their lives efficiently and well?"

There are some interesting bits here. Pryor discusses the neolithic revolution, the moment in human history, when agriculture transformed our ways of life and pushed us in the direction of class society and the accumulation of ever greater wealth. He points out that this was less of a revolution than a gradual process, agriculture having its roots in early experiences, even of hunter-gathering communities. While the transformation was revolutionary, it was not a process that happened overnight, nor was it simultaneous everywhere. This view feels more natural, though I think Pryor underplays the importance of the term revolution in this context. The development of agriculture and the transition to a life dominated by sedentary life, rather than movement was a culmination of what had happened before, but it was also a break from it. Humans constantly develop their forces of production, sometimes they transform their situation into a new mode of production. Hunter-gathering had elements of agriculture to it, but it is a fundamentally different system to one based on agriculture.

But these are really the minor quibbles of a Marxist obsessed with early farming. Pryor's book is one of the best introductions I've ever read into Bronze Age history and archaeology. If it doesn't make you want to read more, or visit the stones of Carnac in Brittany, or Flag Fen itself, then I really cannot imagine what will. Most of all though, Pryor is a writer who likes people. Those that lived, worshipped and were sometimes buried at the sites he describes are real, rounded individuals who lived in the midst of a landscape they tried to shape and understand. For this reason alone, Pryor is an archaeologist who, it feels to me is on the right side.

Posted by Resolute Reader at 7:50 pm

Thanks for this review ResoluteReader. I am developing an interest in Archaeology and your reviews of Archaeology related books have been very useful.

Glad to be of help. There are some specifically "Marxist" books on Archaeology that you might find interesting. One is "Marx's Ghost: conversations with archaeologists" by Thomas C. Patterson. He also wrote one on Marx & Anthropology, which I reviewed elsewhere.

You might also find Archaeology as Political Action, by Randall McGuire of interesting, though I found it's academic style very hard going.

Do you have an interest in a particular historical period?

Any period to be honest, currently studying early medieval Ireland including Vikings/Hiberno-Norse and Anglo-Normans, but I will read any good Archaeology or history book that I can get my hands on. I've read some of V. Gordon Childe's books as I was studying Mesolithic/Neolithic last term, his books were very interesting, if a little dated.

Just finished this book minutes ago and came back to reread your thoughts on it finally as I'd put off reading this review until I'd done so!

I truly enjoyed Pryor's journey as he did his best to illuminate how his archaeology works, from the time a site is discovered through to the time that he publishes a paper about it. At times I truly felt that I was there digging in the trench and could actually figure out *how* he and his team were making the inferential and intuitive leaps to interpret the finds.

I agree with you that Pryor seems to be "on the right side". By placing the sites in the context of the people who made them and their lives, he isn't searching for some grand civilization ruled by kings and armies and other such grandeur, but instead brings such strange timber and rock circles into the lives of people who really aren't that different from the majority of people today: they had homes, they grew food, they had families and mourned their dead in religious ceremonies.

What struck me most tonight was in the final pages are his words on religious conservatism: "In times of change and upheaval, people require a core of stability to hang onto. ... The certainty and truth that religion can provide gives people something solid and reliable at the centre of their changing lives." It got me thinking about election results here and abroad, about the economic crises we're facing and the frightening increase in right wing rhetoric on immigration, social programs and the like...and how it's so urgent now that the messages people look to for that stability in these chaotic times are ones that lead to a better world, not the more divided one that's currently got the floor. While I know this is a characteristic of humans throughout history, I didn't expected a book on archaeology to leave me feeling this way. But, I'm pleased that it did.