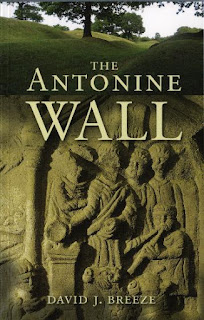 The northern-most frontier of the Roman Empire, marked out by the Antonine Wall is often overlooked by its more impressive southern cousin built by Hadrian. The history of the Antonine Wall is much shorter, and according to David Breeze, it was likely to have been built by a new Emperor, keen to extend his Imperial boundaries in order to win a triumph. But extending the borders like this didn't really win the Emperor much, Breeze points out that he conquered "territory which had once been Roman and, we might expect, had been kept under Roman surveillance ever since."

Unlike Hadrian's wall, much of Antonine's was constructed from turf, rather than stone. An impressive military way would have shadowed the wall, and forts and fortlets helped soldiers patrol and guard the approach. Again, as with Hadrian's wall, this was less of a military defence and more of a border or statement of power. Breeze locates the wall in a wider "military landscape", with Roman forts, settlements and patrols extending over a wider area, north and south of the actual border line.

For those academically interested, there is a wealth of detail here - distances and sizes, lists of military forces based at particular points and so the like. There is also a smidgen of humour, I liked that the chapter dealing with the day to day life of the soldiers stationed on the wall, is called "Life on the Edge". For those soldiers who may have served, or originated in Africa, as evidence of ancient cooking styles implies, this cold northerly location at the most extreme end of the Empire must have felt very isolated indeed. Very much an edge between the known and unknown.

Sadly little of Antonine's wall survive. Extensive parts have fallen foul of the plough, but Breeze's book provides a useful guide to the best places to view the wall. From personal experience I recommend Rough Castle, not simply for the remains, but because of the sense of the wider landscape that the Romans would have been located in. This is a useful introduction to the history of this part of the Roman world and some of the debates and discussions that are still absorbing academic minds. Breeze is honest enough to admit that he has emphasised the evidence that backs his own theories, but I suspect that much of this would mean little to the lay reader anyway, and is unlikely to detract from a useful introduction to a small part of Roman Britain.


Watkins - The Roman Forum
Parenti - The Assassination of Julius Caesar
Beard - Pompeii; The Life of a Roman Town
Beard - The Roman Triumph
Posted by Resolute Reader at 10:45 pm