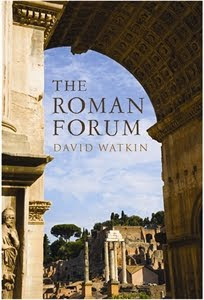 I started this volume of the excellent Wonders of the World series prepared to dislike it. Perhaps I shouldn't read press releases, but when I read that David Watkin's book "celebrates the Forum as it should be seen - etched in the haunting engravings of Piranesi", my heart sank.

The Roman Forum is, for most people, the heart of Rome. It is the place you can go and feel like you're wandering down the Roman streets like the ancients did. This isn't new of course, Watkins shows us how countless tourists have done just that for centuries.

So I was skeptical about a book that seems to imply that the Forum as it is today was somehow wrong and should be appreciated through a return to romantic etchings from centuries ago. Indeed I thought, how can you discuss objectively such a historical setting, if your starting point is that only a particular artist can portray it correctly.

I have to admit that I was wrong. At least partly. What Watkin has done is very clever. He's exposed the myth that is the Forum and laid the basis for a different way of looking at the remains. Firstly he makes the point that little of what we see is real. Much of the most famous monuments, such as the famous Temple of the Vestal Virgins (pictured) are modern reconstructions, using only small amounts of the original materials. In the case of the Arch of Titus, little remains of the original (with the exception of the famous panels) and it is, according to Watkins "largely a nineteenth-century monument". Piranesi's etchings are important, because they are one of the best visualations of what these ruins looked like before various figures through history destroyed, damaged and rebuilt the area in an attempt to recreate it. 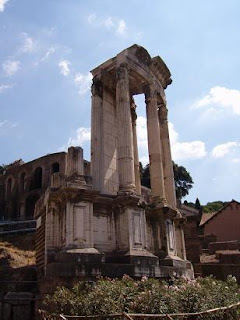 Secondly he shows how even quite recent archaeological practice has destroyed many buildings and remains of great importance in the rush to show the real Forum. This is an interesting and important debate. When you take a historical area like the Roman Forum, at what point should it be preserved? Do we want to see the Roman Forum of 2000 years ago? Or the Forum 500 years ago? The Forum has been lived in for thousands of years. The more modern buildings built in the 13th or 14th Centuries are as much a part of its history as those of Julius Caesar.

This is what the visitor won't see. I think the point that Watkin is making is that visitors are sold an illusion. The idea that the Forum has been frozen in time and they can see it as it was at the height of the Roman Empire. Of course, the Forum changed constantly, particularly in Roman times. Buildings were added, extended and destroyed and Watkin takes us through this history to try and illuminate what we see when we stand there.

So I admit that my first impressions of this book were incorrect. But there are problems with it. Firstly, this is not a history book. It is a book of architectural history that leaves the social and human history of the place out. This is a shame, because the Forum is, above all, a social place. But it can be frustrating for the lay reader. If you don't have a background in architecture and just want to understand more of what you are seeing, what is the non-specialist to make of sentences like this one, describing the Basilica of Maxentius;

"the whole of the north aisle with its central apse and its three arched exedrae with giant coffered barrel vaults which served to buttress the central groin-vaulted nave".

Rare is it that I have to resort quite so often to the dictionary to make it through whole paragraphs. This is a shame, because the rest of the Wonders of the World series that I've read have been tremendously accessible and open to the ordinary reader and this one feels just a little too pompous in places.

What this book does well is make the reader think about the history of places like the Forum differently. How we excavate and display history is important. How we preserve it and interpret it is subject to ongoing debate. So it's an interesting book to take with you to Rome, if only to feel sad has been lost.

Oh, and if you really want to walk down Roman streets visit Ostia Antica. It's a short train journey from Rome. Absolutely deserted and has a fantastic little restaurant in the middle.