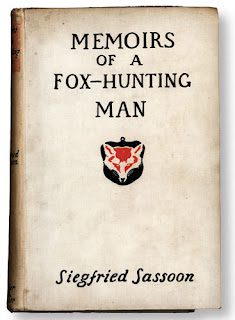 This is a book that really shouldn't work for me. My only experience of horse-riding was one of abject terror followed by a vow to never to get in close proximity to a mule again. I despise the very notion of fox-hunting, mostly because it is a classic case of the ruling class in society thinking they should be allowed to ride rough-shod (literarily in the case) over everyone else and kill out of pleasure.

So Siegfried Sassoon's fictionalised biography of his early life in the countryside should not really have much in it for me. Its a detailed account of his time learning to ride, to enjoy the company of other riders and ultimately to take part in long fox hunts and country races. But I found myself enjoying every page, even the ones with the complex discussions about horses.
Sassoon's brilliant writing is the first pleasure. He's not above the odd joke at his own expense, but his descriptions and his passion shine through. He manages to capture a society on the wane - rural communities that were remote enough to be effectively independent from the rest of the world. The rich of course make the occasional trips to the capital or other places (mostly to take part in hunts) but most people never leave their place of birth. You get a sense of this when Sassoon talks about the distances travelled during some hunts - 15 miles was considered a long long way.

But of course the reader in one sense, knows what happens. For Sassoon the coming war is barely noticeable. He lives a life of leisure - his income of £600 a year is enough for a gentleman's life, though he needs more to full enjoy his hobbies. Few of his friends seem to work. Certainly there doesn't seem to be much debate and discussion about the war clouds that gather. Then Sassoon simply joins up, apparently on a whim, but you get a sense of his boredom and desire for excitement. Eventually he's at the Western Front, though his fox-hunting career and his prowess with a horse ensure that he's welcomed by the right people all along the way.

You start to get a sense at the end of this volume of the coming horror. He loses friends early in the war and the growing clash of the classes behind the lines is very apparent. Sassoon is on the wrong side of this (who on earth brings smoked salmon back from home leave), though to his credit, he seems to know it. Volume two of this book deals with later stages of the war, but the scene is set for a major crisis in Sassoon's thoughts. In a very real way, he reflects the major shocks that the entire political and social system would start to feel as the war went on.

Sassoon - Memoirs of an Infantry Officer
Posted by Resolute Reader at 8:18 pm

I love it when you read something that really work for you, but does. Good writing can cut across time and class and nationality and everything else. I'm curious how you came to read this book? From what I've read of your blog it certainly doesn't seem like one you would pick at all (and nor would I!).

I'm not sure how I did come to read it. I must have read a reference or something, but I found it and the "sequel" - "Memoirs of a Infantry Officer" in a second hand bookshop last summer and just got around to picking them up.

I would heartily recommend it, Sassoon is a brilliant writer and its much deeper than you would imagine from the cover blurb and the title.