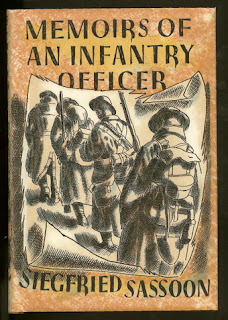 Part two of Sassoon's fictionalised autobiographical account of his early life reads much more lifelike than his earlier account of hunting and riding in the English countryside. At the end of his fox hunting memoirs, we left him in the early years of trench warfare on the Western Front. Several of his friends and acquaintances had already died.

Volume two begins slightly after the end of the first book. We find the author in the Army School, learning or relearning the art of open warfare that the military top brass keep expecting will appear soon, after the infantry in the trenches have broken through the German lines and more conventional war returns. Time and again we find this theme returns, as the soldiers prepare for a "big push" we learn how the cavalry is in reserve, ready to exploit the gaps that never open up.

Most of the book though, is the tale of Sassoon's gradual awakening to the "wrongness" of the war and his growing desire to "do something about it". Sassoon is an officer, from a relatively privileged background. He believes, perhaps rightly, that if he speaks out, it'll count for more than the complaints of the ordinary infantry. What's fascinating though, is the way Sassoon is motivated by the apparent lack of understanding from ordinary citizens back home. Like many accounts of soldiers returning from home on leave, he finds himself unable to describe his experiences, or find comprehension amongst even military veterans.

On the other hand, he cannot bring himself to talk about the reality of war. Even amongst other veterans or wounded in the hospital, there seems to be little discussion about the grim realities of the conflict, just long lists of the dead and wounded.

Sassoon describes how he gradually decides to speak out. In part he can do this because, as an officer, when wounded his convalescence is far superior to that of ordinary soldiers. Staying in good hospitals and then country houses, he has time to read an think. He certainly feels little pressure to return, and when he overstays his sick-leave he is simply asked by telegram where he is.

His eventual letter, speaking out against the war, is written by someone convinced he is speaking on "behalf of soldiers" everywhere. If this had been from an ordinary infantryman, I suspect that court martial would rapidly follow. Instead, with his rank and class background, Sassoon is argued with by friendly senior officers to withdraw, then he is offered a trip to a medical enquiry to check he is of sound mind. Eventually he agrees to this, as he finds that no one really wants to risk the embarrassment of a court martial.

Sassoon's rebellion is influenced in a minor way by some anti-war activists and thinkers. But what really convinces him is the reality of conflict and the tremendous waste of the pointless conflict. It is clear that he is the tip of a much larger iceberg - around him it is common to complain about those sitting out the war, or profiteering from it, or enjoying it from afar.

In other countries, notably Russia and Germany, these sentiments combined with growing lack of food and supplies to create a situation of mass rebellion and revolution. This didn't happen in Britain, though there were some major struggles. But its clear from Sassoon's account that the feelings of those at the bottom of the army were not differing greatly from those of the troops in the trenches a few yeards away.

Sassoon - Memoirs of a Fox Hunting Man
Posted by Resolute Reader at 3:09 pm