Mark O'Brien - When Adam Delved and Eve Span, A History of the Peasents Revolt of 1381 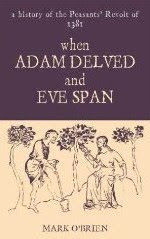 The title of this book, refers to the famous couplet that raised the question of class relations in society in a way that made sense to the ordinary people of the medieval ages.

"When Adam Delved and Eve Span, Who was then, the Gentleman?".

Mark O'Brien's inspiring history shows exactly how and why such a piece of rhyme could capture the ideas of the 14th century peasant and inspire many tens of thousands of them to rebellion. The 1381 Peasants Revolt sent shock waves through the English class system. It led to many of the worst criminals of the aristocracy loosing their heads and fundamentally changed the relations between rich and poor.

Mark O'Brien paints a fascinating picture of an England on the cusp of change. The Black Death had decimated the population of Europe and for the first time, a shortage of manpower was allowing hitherto unalterable class relations to be challenged. Previously a local Lord held his population in an iron fist. Peasants rarely left the local land, the ideas in their heads dominated by a religious orthodoxy that had a place for everyone in Gods kingdom, ruled over by a rigid class system with the king at the top. But this was falling apart. The labour shortage meant that for the first time, labourers could move around and demand higher wages. Undermining the basis of the Lord's local power.

Simultaneously, the power of the church itself was also being undermined. Internal arguments in the church nationally and internationally, meant questioning of religious doctrine. And finally, the needs of the ruling class to make others pay for it's ongoing wars created a situation were the ordinary English peasant had had enough.

O'Brien depicts the spread of the revolt not simply as a spontaneous uprising against the collection of the Poll Tax, but as a growing, developing, organised movement that involved tens of thousands of people. The rebels didn't indiscriminately loot and murder. They targeted the buildings, individuals and documents that they saw as propping up an unequal society. They were organised - the revolts leaders sent letters and messages to villages across the country, co-ordinating, organising and inspiring further revolt. And they were armed. The peasant armies that besieged London, were tens of thousands in number, armed with the weapons that many highly trained soldiers had brought with them from the wars with France.

The revolt was incredibly successful. London was captured and the King and his closest advisors besieged in the Tower of London. The King was forced to negotiate with the peasants as equals, something from which the country's rulers would never quite recover.

O'Brien shows how the rebel's ideas developed and grew. Starting of rebelling against the hated taxes, by the end they were demanding freedoms that were unthinkable months before. The abolition of the churches property - the redistribution of wealth and land and so on.

Despite the trickery of the King who murdered the rebel leaders and massacred their way around the country to regain power, England was fundamentally changed. Peasants could look their rulers in the eye, knowing that they too were human. Mark O'Brien's short book packs in a huge amount and gives a different version of medieval history - one to inspire us today at the great potential for rebellion amongst those who would be ignored by Kings and rulers. Ignored at their peril.

O'Brien - Perish the Privileged Orders, A socialist history of the Chartist movement
Posted by Resolute Reader at 10:01 am