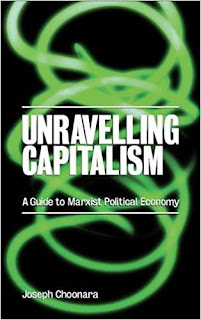 Economics is one of those subjects that those who are proficient in it, often like to pretend is beyond the understanding of most mortals. Unfortunately, recent economic news, the reactions to failing banks and the inability of governments around the world to protect ordinary people from the effects of recession, would prove that most economists know little about economics.

There is a secondary, but related myth. That Marxist economics is even more difficult to comprehend. Marx had some interesting insights we are told, but they don't really explain what capitalism is about.

Joseph Choonara's excellent new book is a fantastic introduction to Marx's economics. Starting from the fundamental basics of economics, Choonara builds up a picture of a complete economic system. In doing this, he helps even those with little grounding in economics understand precisely what is wrong with the system we live in, and why, once again we are living through an era of economic crisis.

For Marx, capitalism is different to other, pre-existing class systems because of the nature of the basic exploitation at the heart of the system. Capitalists employ workers, who are paid less than they generate in value for their boss. As Choonara explains;

Choonara goes on to show how, the need of the capitalists to constantly accumulate more and more value, in blind competition with the other capitalism leads to an anarchic and chaotic system. What is good for the individual capitalists is bad for the system as a whole. Unlike pre-existing economic systems, the surplus value that is generated from the exploitation of the workers is pumped back into the system - further investment in raw materials or new machinery. This allows the successful capitalist to improve is production process, stealing a march on his rivals.

But this also has the effect, of driving down the general profit rate in society - making it harder for the capitalist to accumulate more. The system as a whole finds it harder to use up what it is creating and overproduction of goods is one consequence. We arrive at a situation then, were economically capitalism produces huge numbers of products that are needed by millions of people, but these people are unable to afford to use them. A contemporary example would be the glut of flats and houses on the market in the UK today, at the same time as more and more families live in overcrowded or temporary housing.

Choonara goes one to demonstrate how this localised crisis of profit rates mean that "the least efficient capitalists are driven under", but this has a snowball effect on the system as a whole - leading to a generalised economic crisis.

But as capitalism has aged, it has become increasingly based on bigger and bigger blocks of capital. Companies have swallowed their competitors up (The revenue of the top 100 corporations in the world is now over $10 trillion, bigger than the GDP of the 174 poorest nations) and these means that the knock on effect of a single failure is far greater than in the past. Witness the desperate attempts by contemporary governments to keep banks and multi-nationals afloat.

This is a detailed and well written book. The centrality of the economic situation to political discourse at the moment makes this a must read for any radical trying to understand the ins and outs of the system. It should also be on the reading list for every economics student in the country, clearing away the confusions that a myriad of mainstream commentators have spread about Marxism.

But this book is also a weapon in the struggle for a better world. Choonara hasn't ignored the other aspects of Marx's thought. Economics isn't something outside the political struggle, but something that influences and is influenced by the wider picture. And by reasserting the central exploitation at the heart of capitalism, the author has put the exploited back at the heart of changing the world. Capitalism has created it's own gravediggers. This book shows both the urgency of getting rid of this outdated economic system and points the way forward for doing just that.