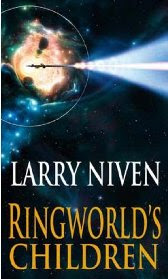 The final part of the Larry Niven’s Ringworld SF series is a brilliant return to form. Millions of readers like me thrilled at Niven’s original novel, depicting as it does a mysterious ring around a far sun, populated by billions of humanoids and advanced, strange technology. It was the ideal place to set a story of exploration.

The first volume was superb, rightly winning awards and public recognition. The second book Ringworld Engineers was very good. Personally I found the third unreadable - a confusing plot that missed out the exciting stuff about exploring the strange new world.

This final book ties up all the loose ends of the series - and from a few of Niven's other stories. It centres on the final “battle” for the Ringworld which is now a prize for all the galactic civilisations of Niven’s “Known Space”.

The Ringworld takes damage as those civilisations fight to get control, but there are other forces on the Ringworld who want to protect it. Their ingenious idea to save this unique structure is mind-boggling. But this after all is speculative fiction, and it is a fitting climax to one of SF’s great series.

There's a massive collection of stories set in a ringworld environment(s) by a guy called Elf Mathieu Sternberg. Erotica, they are available at http://www.pendorwright.com/journals/?toggle=Episode+Order