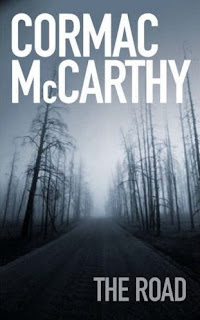 There’s a point near the beginning of this novel where the father and son ‘heros’ find an old destroyed soft drinks machine in the rubble of a long looted supermarket. Scrabbling around in it, the father finds an unopened can of Coca-Cola. Giving it to his son to drink, the boy drinks the over sweet drink for the first time and offers some to his father. Initially his dad refuses it, then takes a small sip. Wondering why, the boy suddenly realises

“It’s because I wont ever get to drink another one, isn’t it?”

In these few words, the total collapse of human society are summed up. Coca Cola's global brand, that symbol of capitalism, the logo known from Alaska to Australia, Russia to South Africa, is forgotten and has become the stuff of dreams.

Cormac McCarthy has created a terrible world. Or at least he has understood how terrible the world could be. Wisely he avoids ruining the book by speculating on what caused the terrible collapse of society. Instead we consider the minutae of the lives of those struggling to survive on a planet where nothing grows, most food has long ago been looted, and in small pockets, slavery, cannibalism and murder are daily realities.

The titular road, is the journey that our father and son make, on an odyssey to the coast – we never learn the reason. We do however learn, that in such a society there are no morals. Good and bad aren’t necessarily what they were, they become what you do to survive. The gradual awaking of the son to this reality is heart-rending.

Ultimately, it’s a stark road they travel. The ending is painfully emotional, which is surprising given some of the places we visit during the journey. There are few novels that cover genuinely new ground, this is one of them.
Posted by Resolute Reader at 7:56 pm

Very much enjoyed the time I spent reading and looking around your site...as a poet, an avid reader, and hard to please, I found it a most rewarding look. Thank you...

It's a wonderful sequence isn't it? One of the better in the book (that's not a criticism of it), I'm not surprised you picked it out.

Good point on the connection between the brand chosen and its implications. And yes, he was right to avoid overdetailing what happened, it seems to be nuclear war but it's not really the point, is it? The man, his son, the road, that's the point.

Thanks for flagging the review to me, I missed it before.