Mike Gonzalez - In the Red Corner: The Marxism of José Carlos Mariátegui 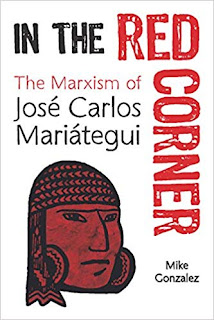 The recent radical "pink" governments in Latin America are part of a long history of revolutionary politics in that region. However discussion of that history in Europe usually neglects, or ignores, the rich and important revolutionary ideas that have developed there. So I was very pleased to see that Mike Gonzalez has published the first English language biography of one of Latin America's most important and original activists and thinkers, José Carlos Mariátegui.

In his short life (1894 - 1930: he died when he was just 35) Mariátegui proved himself a brilliant political organiser, writer and thinker. Gonzalez explains that Mariátegui was


A Marxist in thought and practice; his ideas evolved and grew in a specific time and place, and responded to the political demands of both. The evolution of his ideas began in Peru in the conditions of semicolonial society still stamping at the threshold of modern capitalism. But... Peru was not one world but two; in the encounter between indigenous Peru and criollo [people of Spanish descent] Peru, he found new challenges and the human and historical material for a creative new vision of how revolutionary change could occur in Latin America.

Mariátegui lived during a formative period for Peruvian capitalism, but also for world socialism. An extended trip to Europe in the aftermath of the Russian Revolution and the mass struggles that shook the country he spent much of his time in, Italy, turned Mariátegui into a Marxist. But his Marxism was not dogmatic. Influenced by the revolutionary ideas swirling around the debates during the formation of the Italian Communist Party, Mariátegui returns to Peru convinced that Marxism can explain both the historical development of the country and offer a strategy for the millions of oppressed and exploited.

In Peru four fifths of the population was indigenous and an important question for Mariátegui was their role in the movement. Gonzalez argues that "their consciousness was certainly formed by the their location in the economic system, but not only that" and for Mariátegui the key question was whether this "would separate them from the rest of the movement, or include them, enriching and diversifying the movement."

Today, in many parts of the world, big social movements are developing around the ecological crisis and the way it is driven by capitalism. Indigenous people, in places like Canada, North America, Latin America and Australasia, are playing a key role in these movements, not simply as activists, but with sets of ideas that Gonzalez describes (in the context of Latin America) as territorio, a "notion beyond geography, which embraces history, philosophy, cultural forms and practices and theidea of enduring collective ownership". In particular, for Mariátegui, there were a set of ideas and social forms that arose in Peru in Inca society which carried through into modern society, and were socialist in nature.

Much of this book looks at the development of Mariátegui's own ideas and his life of activism. One central idea for Mariátegui is the concept of "myth" which one thinker quoted by Gonzalez describes as the "anticipatory consciousness of a class, or... its most advanced sector... at a given moment in time and which glimpses or senses... a new reality and struggles for its realisation."

This controversial idea was not Mariátegui's originally, but he develops it into a concept closely linked to his views on the "revolutionary subject". Here Mariátegui arrives at a "broader perception of that subject in which other social layers [than the working class] and classes could identify with, and participate in the social revolution impelled by the labouring classes". Gonzalez's notes that this concept might be seen as analogous with Hardt and Negri's "multitude" but that is an inadequate comparison. Certainly Mariátegui understood the central role of the working class as being in a unique position to transform society, which is why he spent so much time as a trade union and socialist organiser. Gonzalez writes:


Mariátegui was very clear that the Peruvian working class was not in a position to create soviets - it was too small... in a phase of disorganisation and demoralisation. Yet the general conclusion he did draw was that a socialist revolution, however far into the future it may occur, must at all costs avoid the emergence of a bureaucratic layer acting on behalf of and against the general interests of the class. The possibility of a socialist transformation would hang on the existence of a driving narrative with the emotional power to bind together the collective will - in other words, a myth.

The use of the word myth, and Mariátegui's broader comments on the "revolutionary subject", allowed many to dismiss his ideas as non-Marxist. In fact Mariátegui had a much deeper and dialectical Marxism than many of those who attacked him. It is noteworthy, for instance, that unlike some radical thinkers, Mariátegui was not Utopian about indigenous people or their historical societies. Mariátegui wrote "Modern communism is a very different thing from Inca communism... Each is the product of a very different historical epoch... In out time autocracy and communism are incompatible, but that was not the case in primitive societies. Today's new order cannot renounce any part of the moral progress that modern society has made."

In other words, a socialist transformation of society is not a turn back to some historical idyll, but one that builds on all the developments of history. Mariátegui's Marxism did not fit with those rigid dogmatic idealists who took over the Communist International in the wake of the isolation of the Russian Revolution. They attacked him for refusing to help form a Communist Party in Peru at a time Mariátegui felt was unripe. Crudely applying Marxist concepts to Peruvian history didn't work and went against everything Mariátegui argued Marxism was:


Marxism, which many people talk about but few know or, more importantly understand, is a fundamentally dialectical method that is, a method that rests integrally on reality, on the facts. It is not, as some people wrongly suppose, a body of rigid principles and their consequences, identical for every historical age and all social latitudes. Marx pulled his method from the very guts of history. Marxism in every country, in every people, operates and acts in the ambience, in the environment, neglecting not of its modalities.

The tragedy is that Mariátegui's life, cut short by illness, meant that he was not able to develop and build on his revolutionary ideas. It is tempting to speculate about what might have been had Mariátegui lived longer, or had access to more writings of Marx and Engels or those of contemporary revolutionaries like Leon Trotsky in the 1930s. Stalinist writers tried to destroy Mariátegui's legacy for his failure to commit to the formation of the Peruvian Communist Party, though it is clear from Gonzalez's book that for Mariátegui, this was not a failure to understand the need for revolutionary organisation, but rather a complex strategical question.

With this in mind, and with the urgent need for the rebuilding of revolutionary organisation in Latin America and across the globe, it is excellent that Mike Gonzalez has produced this accessible and fascinating guide to the life and ideas of José Carlos Mariátegui, one of Latin Americas' great, and sadly neglected, revolutionaries.

Gonzalez - The Ebb of the Pink Tide
Gonzalez - Rebel's Guide To Marx
Gonzalez - Che Guevara and the Cuban Revolution
Sader - The New Mole
Posted by Resolute Reader at 10:25 am

This is not the first biography of Mariátegui in English. Jesus Chavarría published one in 1979, though Gonzalez appears to be unaware of this.