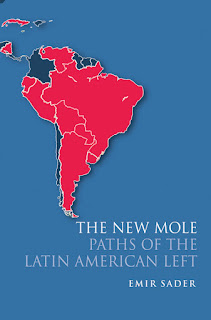 Over the last decade and a half or so Latin America has, along with the Arab Revolutions, been one area of hope for those of us who hope to see radical change. A succession of mass movements and left wing governments have offered, and continue (in some cases) to offer hope. Certainly leaders like Evo Morales in Boliva and Hugo Chavez in Venezuela have inspired millions. The mass movements of rural workers, landless peasants as well as the urban working class have brought down governments and shaken the complacency of important people in Washington.

Emir Sader's recent book is an attempt to grapple with the changing movements in South America and offer some direction forwards. Unfortunately the book is somewhat mechanical in its approach to historical change and while it acknowledges the problems of some of those governments (such as that of the Workers' Party in Brazil) which have failed to deliver much of the people's hopes, Sader tends to argue that better a slightly progressive bulwark against neoliberalism than none at all. Even if this means capitulating to the wider problems of the capitalist system.

Sader begins by locating the story of South America in a wider Marxist history. In particular, as the title of his book implies, he concentrates on Marx's "Old Mole" of history, the revolution that emerges, then disappears only to reappear somewhere else. But Sader's vision of what the revolutionary mole is varies through history. Beginning with the post-World War One revolutions in Russia and Europe he then locates a follow up appearance in Cuba.While the Cuban revolution certainly had popular support and defeated a vile regime it was not the same mass movement that had been seen elsewhere.

This becomes even more apparent when Sader describes where the "mole" appears next. With the defeat of guerrilla movements in South America and the death of Che Guevara, Sader tells us that "the mole responded by promoting institutional governments - that of Velasco Alvarado in Peru in 1969, that of Allende in 1970". While these were progressive challenges to the system they were also very much within the system. Certainly not what Karl Marx imaged when he hoped that Old Mole would burrow up into the daylight again.

This is not to say Sader is on the wrong side. He absolutely understands the way that Imperialism and capitalist forces have attempted to smash those governments and movements (from Chile to Nicaragua) that have threatened their interests. But because he also sees the later Soviet Union as progressive (at one point he describes Stalin as one of the "new leaders of the revolution") and the collapse of the Eastern European regimes from 1989 onward as a defeat for the socialist cause, he cannot help but see the problems of the left as being a crisis of legitimacy, rather than a failing of strategy.

As a result of the defeat of the Soviet Union, Sader tells us that the Washington neo-liberal agenda has run rampant. But "neoliberalism's biggest achievements were not in the economic field, where most of its promise had lain, but in the social and ideological fields." By this Sader means the destruction of public services, weakened unions, increased unemployment and an more atomised workforce. "The majority of Latin Americans can no longer organise, have no recourse to justice and no public identity" he claims. Yet this flies in the face of the reality that large sections of the Latin American population have always faced these problems and have resisted and continue to do so.

For Sader, neoliberalism rather than capitalism is the problem. "Latin America was the laboratory of neoliberalism" he tells rightly us;

"Here it was born, here it spread and here it took on its most radical forms. As a result, the continent suffered a neoliberal hangover and became the weakest link in this chain, with a proliferation of governments elected on the back of opposition to neoliberalism, contrary to the tendency elsewhere in the world."

The problem with this analysis is that it increasingly sees the key task for the left as being to encourage those governments that challenge neoliberalism rather than building a wider movement against capitalism. This is not to say that Sader ignores mass movements, on the contrary he champions them, but he does not see them as key.

Why is this? Sader is clearly of the revolutionary left, but in his critiques of what he calls the "ultra left" he seems to have given up on the task of revolutionary change. Part of this comes I think from his weak politics. His obsession with a world-wide defeat for the working class as a result of the end of the "bipolar" world in the early 1990s. More worryingly he seems to misunderstand the role of the state. Classical Marxism as well as the work of subsequent revolutionaries like Lenin, saw the State not as a mediating force between the classes, but as an instrument of class rule. Sader however sees the State as something that can be appropriated by governments as weapon against neoliberalism.

"it could also be a state that has been refounded by governments that seek to break out of neoliberalism, developing new structures of power. The state is, therefore, a space in dispute."

"All the more reason, therefore, for the presence of the state in the fight against neoliberalism."

The problem with this analysis is that it leaves the movement and the anti-neoliberal governments Sader looks to weak in the face of the forces of capitalist power. Sader is well aware of what took place in 1973 in Chile when the CIA and Pinochet smashed a left wing government to protect their wider class interests. But he doesn't seem to have learnt his lesson. While rightly critiquing those like John Holloway for not acknowledging the need to "challenge for power" Sader has failed to give any real line of march for the wider left movements in South America that could begin to seriously challenge the system. As a result The New Mole makes some interesting points and is a useful, short summary of the radical history of South America, but it needs to be read critically and challenged.

Sader & Silverstein - Without Fear of Being Happy: Lula, the Workers Party and Brazil
Posted by Resolute Reader at 11:18 pm

Thank you for sharing this, very helpful! Have you happened to read something that would be a good primer on general historical tendencies in Cuba, Venezuela, Bolivia, etc? feel free to email me at michelle.e.grady (at) gmail dot com