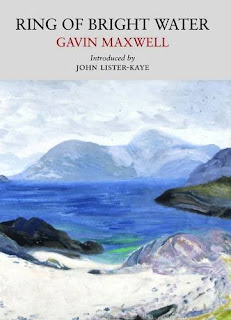 I've always thought fondly of Ring of Bright Water, a book that had a pride of place on my father's bookshelf and a film that I vaguely remember being on the Saturday afternoon schedules every few months. So when I recently discovered it on a pile of cheap paperbacks in a second hand book shop I decided, for the sake of Dad's memory, if nothing else to have a read. Repeated failures recently to see otters in the wild on a Scottish holiday may also have encouraged me.

The book was not what I had expected at all. I had always imagined Gavin Maxwell as being a strange lonely figure living in remote Scotland with only local otters for company. While he does live in remote Scotland - a location that gives us some fascinating descriptions of post-War life among crofters and the fishing community, he travels widely through the book and neither of the two otters he befriends come from Scotland. The first was actually a rare otter from Iraq's marshland and Maxwell gives his name to the species, the second from West Africa found by a family that Maxwell meets while still in mourning for his first otter that is killed in a tragic accident.

Much of the book is Maxwell's musings on the nature of otters and their suitability as pets. Maxwell's an unusual character himself. While staying in London he frequently walks the otters on a leash to Harrods to do shopping. He also is (or was an avid hunter). The book has, as a result, some laugh out loud comic moments and the occasional bit where today's reader might think, well thank god the past is a different country.

Actually the most interesting bits don't have otters in them at all, but discuss the wildlife, ecology and society of the small area of Scotland that Maxwell lives in, when he isn't travelling the world or shopping in Harrods. It's beautiful and you really get a sense of how the last fifty years have seen a complete sea change in local flora and fauna. Interesting though this is, I doubt I'll be looking for the sequels, though Maxwell's recently republished account of his time running a business hunting Basking Sharks for oil is on my list.
Posted by Resolute Reader at 7:51 pm