Tim Flannery - The Eternal Frontier: An Ecological History of North America and Its Peoples 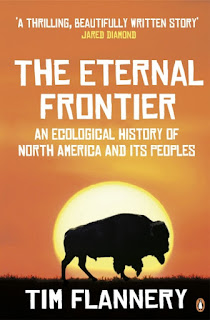 The relationship between humans, the societies that they create and the natural world around them is something that fascinates me. Of particular interest is the way that the most modern human society, capitalism, is inherently anti-nature.

All societies have a history. Capitalism is merely the latest stage of human history. However there is also a non-human history too – this is the history of the world that we live in, its flora and fauna, its geology and geography.

What Tim Flannery has done in “The Eternal Frontier” is to take one great continent – and look at the history of the place as a whole. In many ways this is unique. 65 million years ago, what became North America was pretty much ripped apart as a giant object impacted in what is now the Gulf of Mexico. The nuclear winter caused by the dust and smoke created wiped out something like 80% of all species, including of course the giant reptiles that had dominated until then. This opened the way for the rise of the mammals.

Flannery documents brilliantly the evolution of plant and animal life post impact. He describes the few living fossils that remain, left over from before. But mostly he concentrates on the evolution of the new. The book comes into its own when Flannery describes the arrival of humans. The relative isolation of the American continent didn’t stop plants and animals going back and forth, though that was rare and limited.

But it was only recently that humans arrived there. They arrived in a land dominated by giant creatures that had not learnt to fear the hunting ability of humans.

Flannery describes the role that these hunters played in the extinction of the mega-fauna – the mammoths in particular. He very much sides with the “black hole” theory of extinction – dozens of species were wiped out to fill the hole in the face of the hunters. This contrasts with those who argue that only climate change was responsible for the decimation of the animal populations.
To back up this argument, Flannery points out that not all previous changes in climate caused such specific extinctions, and he presents us with the evidence of mass culls and hunts by ancient peoples.

We then follow the rise of agriculture and the city states that often developed around this new practice of creating food. Flannery shows how in the American context, these were often short lived, but nevertheless, by the time of the arrival of the first Europeans the population of the American continent was something like 30 million people.

With this new immigration, everything changed. The mad rush to exploit the wealth of this new continent had a devastating effect on the native population. But the exploitation of the natural resources was just as devastating. The obvious example of this is the Buffalo which went from a population of between 30 and 60 million to a few hundred in a couple of decades.

Flannery doesn’t pretend that there was some sort of wonderful Utopia before the arrival of Europeans. The native Indians are often portrayed as living in balance with the natural world. Flannery argues that this is rarely the case, though clearly the Indian societies had a far better understanding of how to husband animals than those who took their place.

But the ability of capitalism to find ways of exploiting the natural world for profit and to create the infrastructure to maximise this exploitation is far greater than any previous human society.

The Clovis Hunters might have forced the mammoths into extinction, but they couldn’t fundamentally alter whole eco-systems. In the few centuries since Europeans arrived in the “New World”, Flannery argues that the American continent has been re-shaped and changed beyond recognition.

The last chapter of this book then is an appeal for a more sustainable way of living that both preserves the natural world but also understands how to exploit nature without permanently destroying. It’s a noble hope, though whether capitalism can do this is very much open to question.

Flannery - The Weather Makers
Posted by Resolute Reader at 9:03 am