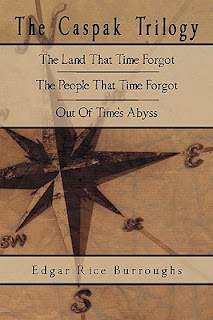 The Caspak Trilogy comprises three of Edgar Rice Burroughs less famous novels - The Land That Time Forgot, The People That Time Forgot and the oddly named Out of Time's Abyss.

If I am going to be honest, all of these novels read like spoof 1920s adventure tales. Of course this isn't high literature, this is pulp fiction and that's a particularly generous description. That's not to say that mass market novels don't have any merit, even when they are swamped in the prejudices of their time - see for instance this review of a Jules Verne novel I did recently.

However these three novels are in a class of their own. If you've seen the film that carries the same title as volume one, you'll know the rough plot line. Heroic, square-jawed types get captured by cowardly Germans in a submarine and get taken to a uncharted island that turns out to be populated by prehistoric people and animals. Lots of shooting of ancient dinosaurs occurs and there is some love interest. Frankly if you've seen the film and not the book, leave it at that.

The book is truely awful. Even at the time of printing, people must have read it and though, "he's taking the piss isn't he? He's trying to see how awful a book he can get away with?" Let me give you an example of what I mean, by exploring the use of coincidence in the first couple of chapters of book one.

One of our American heroes is on a transatlantic liner (a neutral one) for this is the early days of World War One. His ship is torpedoed by a submarine which, being a submarine designer he both recognises as one he built and also knows how to control. Finding an empty rowing boat in the ocean following the ship's sinking, he rescues a young woman on her way to Germany to get married to a German Naval officer. Hero is in turn rescued (along with his dog) by a English tug, which then is attacked several days later by the same U-boot. The heroic English captain tries to ram the U-boot, which our heros manage to capture and because they have the knowledge to pilot now, they can take to England. One board the U-boot is a nasty, evil German officer. Guess what? Yes, he is the person that beautiful maiden intended to marry.

Frankly it doesn't get better than that and we haven't even met the dinosaurs. I jest.

Oddly enough, Burroughs doesn't simply have prejudices, he is also a downright nasty rightwinger. One of the traitors who does over our heroes is, guess what? Not a German spy, but a member of the IWW who "hates America". Shades of Mcarthy there.

The only other fascinating bit here, apart from the endless shooting of dinosaurs, traitors, wild men and Germans, is the evolution that the prehistoric island of Caspak has. Burroughs realised that he couldn't have a snapshot of time, otherwise Tyrannosaurus Rex couldn't chase Cro Magnon. Rather oddly he invents a new evolutionary method - everyone and everything passes through every stage of their evoution on the island, from small tadpole to primitive then older creature. It's fascinating for a while, then you spot the plot holes.

Anyway. Read this if you are a sucker for really bad novels or like dinosaurs being shot. But avoid it if you really want to try and read Dickens.
Posted by Resolute Reader at 8:34 pm

I have a large soft spot for Burroughs.

Oddly, although much of his fiction is as you say dodgy on the racism front, I've read one of his which is clearly and openly anti-racist.

In it Europe has been destroyed by plage. In our absence China and Africa produce advanced and benevolent civilisations, the only thing having stopped them previously being our imperialism. It's not a good story, it's too didactic for that, but it does suggest his views on race were more complex than might at first appear.

I actually own some of these, I must read them and see if I like them more than you did...

It's a misreading of Burroughs to label him as racist. Many of his novels are steeped in racist language, but when you cut past the language and look at the stories themselves, they are as profoundly anti-racist as you could ever wish for. Burroughs' heroes always treat people they meet with respect and honor, regardless of ethnicity. Conversely, whenever the heroes encounter societies of racial supremacists, those societies are the bad guys. In one of the later Mars books, John Carter openly muses about the possibility that Earthly humanity might one day be improved through race-mixing such as that which occurred on Mars long ages in the past.

Burroughs was writing for a thoroughly racist audience, and he wrote to them in a language they would find comfortable. But any wide reading of his work will make it clear that he was writing to change them, to plant the seeds of egalitarianism and tolerance.

As for the Caspak stories specifically, I won't argue for their literary quality, although I found them fun reading. But I will point out that two of the three protagonists end up in romantic relationships outside of their own race, and that all three of the female characters are portrayed as brave, smart, strong-willed and physically capable.