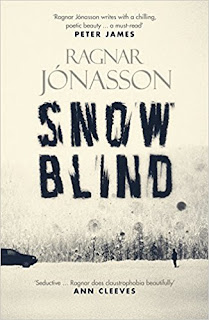 There is no polite way to say this, but Ragnar Jónasson's novel is terrible. It is badly written, has a contrived plot and a jumble of identikit characters. Set in a small former Icelandic fishing port, the novel is supposed to evoke intense claustrophobia. Instead it left me feeling that the author had come up with a list of cliches about remote northern locations and was ticking them off one by one.

But the real problem is not the writing, editing or language. The problem is that the story is too weak and the mystery is completely unbelievable. The hero Ari Thór Arason is a rookie policeman at his first job. Like almost every other rookie policeman his relationship is on the rocks which the reader knows because Ari agonises over it a great deal. He ends up in one of civilisation's backwaters just in time for a sudden death and a near death.

These are the first such events in years, so Ari's timing is extraordinary. Not surprisingly Ari is the only one who is suspicious that the town's most famous, and wealthy, son is the person who dies, in the midst of preparing for a play that has caused quite a bit of friction among contemporaries. It wouldn't be fair to go into what is wrong with the other victim, suffice to say that modern police forces can usually work this out even when they don't have access to fancy forensic laboratories.

I suspect that the reason that Jónasson's book got published was that bleak Icelandic detective fiction is the in thing at the moment and the publishers saw a chance to grab a share of the cash. Judging by the reviews and the number of readers they're probably pleased with the outcome. I am just happy I did not give them any more money.

Posted by Resolute Reader at 9:36 pm