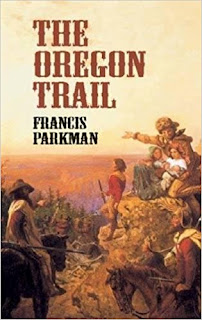 This fascinating account of North America in the mid 19th century is a description of Francis Parkman's expedition into lands remote from the eastern "settlements". Parkman initially accompanies the settlers' heading west towards Oregon, and his accounts are fascinating insights into how the settlers viewed the world, and how they themselves were seen. It's notable, in this description how Parkman sees the settlers as only being interested in personal gain:


Yankee curiosity was nothing to theirs. They demanded our names, where we came from, where we were going and what was our business. The last query was particularly embarrassing; since travelling in that country, or indeed any where, from any other motive than gain, was an idea of which they took no cognisance. Yet they were fine-looking fellows, with an air of frankness, generosity and even courtesy, having come from one of the least barbarous of the frontier counties.

That said, he is scornful of them at times:


On visiting the encampment we were at once struck with the extraordinary perplexity and indecision that prevailed among the emigrants. They seemed like men totally out of their element; bewildered and amazed, like a troop of schoolboys lost in the woods.

Parkman's trek did actually have a purpose. It was, in part, simply about a young man with money wanted to see the wilderness. At the same time, it was the opportunity to hunt as many animals as possible, particularly buffalo.  Ironically, he, like many of his contemporaries shared a belief that these animals were so numerous that they could be killed without consequence - "Thousands of them might be slaughtered without causing any detriment to the species".

But it for Parkman's commentary on the Native Americans which this book shall likely be chiefly remembered. Parkman went to live with one of the tribes he encountered for a number of months. He rode with them, ate with them, hunted with them and watched their preparations for war. His accounts are frequently sympathetic, though he essentially sees them as a backward, savage race with childlike simplicity. The Native Americans, are, in Parkman's eyes untrustworthy, bloodthirsty, and prone to robbery. He also understood that things were changing:


These men were thorough savages. Neither their manners nor their ideas were in the slightest degree modified by contact with civilisation. They knew nothing of the power and real character of the white men, and their children would scream in terror at the sight of me. Their religion, their superstitions and their prejudices were the same that had been handed down to them from immemorial time. They fought with the same weapons that their fathers fought with, and wore the same rude garments of skins.

Great changes are at hand... With the stream of emigration to Oregon and California, the buffalo will dwindle away, and the large wandering communities who depend on them for support must also be broken and scattered.The Indians will soon be corrupted by the example of the whites, abased by whisky and overawed by military posts.

There's no doubt that Parkman sees this as a good thing. White civilisation was to be emulated and aspired too - its reality was to be contrasted with the barbarism of Native American life. Sadly, while Parkman's book is full of interesting observation about Native American life in this period and with the tribes he encounters, its tempered by his racism and white supremacy. So read this book for the descriptions and the account of a country in the process of huge transformation, but do so knowing that opinions like Parkman's would help destroy the lives of tens of thousands of people, and the environment they depended on.