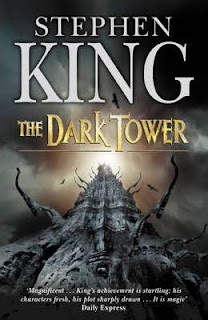 I began reading Stephen King's epic Dark Tower series back in 2006. For reasons best known to myself I decided only to buy them when I found them second hand. Hence it's taken longer to finish them than Roland, the last gunslinger and hero of the novels, spent on his quest. It's perhaps this time lag that has helped make reading the series feel like an epic trek, but most of that is to do with King's writing. The scope of this series is truly huge. The characters are numerous, but never shallow. Even relatively minor characters (I'm thinking of Bill the Stuttering Robot in the final book for instance) feel worthy of their own books.

The books themselves vary. Some aren't as good as others, and strangely, the two I enjoyed the most, are the ones least about the quest. Wizard and Glass and The Wastelands both work almost as self contained books, and King's writing befits this well. That said, they are essential to the wider story, and must be read as part of that.

In reviewing the climatic novel of such a long and complex series, it would be wrong to talk about the plot. Mentioning almost any details might ruin other readers taking the same journey. I suspect that most readers are reading toward the end, though the true enjoyment of these books is the trip. King understands this (in fact, in the epilogue to this last volume, he acknowledges this explicitly, and alludes to it in the last chapter) and perhaps the ending is not as satisfying as many would hope. That said, when you have followed characters through some thousands of pages, it is difficult to not feel emotionally linked to them. The ending itself is, at first glance, somewhat flat, but the reader might have to read it again, in detail to understand exactly what is being said.

Back in 2006, I worried that this might be a "long turgid trip" to volume seven. It certainly was long, but it was rarely turgid. While occasionally I felt an editor might have removed some of the words, the imagery and characters will long remain with me.

"Go then, there are other worlds than these."

King - The Gunslinger
King - The Drawing of the Three
King - Wizard and Glass
King - The Wastelands
King - Wolves of the Calla
King - The Wind Through the Keyhole
Posted by Resolute Reader at 9:55 pm