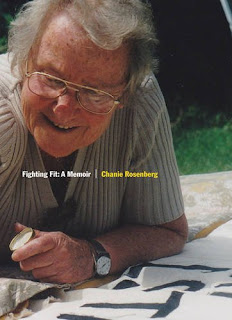 Many members of the British Socialist Worker's Party and its sister organisations will be familiar with Chanie Rosenberg. She is one of the group's longest standing members, who helped, alongside her husband Tony Cliff, found the International Socialist tradition. In this short memoir, Chanie says that she hopes "to show that we revolutionaries are people like anyone else.. what happens between the evening meeting and the weekend paper sale?"

It is an excellent reason for writing such a book, but Chanie's life has been far from normal. She grew up in a Jewish family in racist South Africa, moved to Palestine to live on a socialist kibbutz in the 1940s but found her eyes opened to the racist nature of that state, and then began to engage in illegal, underground work agitating as part of a small Trotskyist organisation. Chanie and Tony Cliff lived in extreme poverty during these years. Moving to England things improved as Chanie was able to work as a teacher, and in doing so became central to some of the major struggles in the 1960s as teachers began to organise. Chanie played a central role in the rank and file of the teachers' union, and was blacklisted for her activity. Nonetheless she clearly, and rightly, remains proud of the victories they won.

Chanie's second great love is art. When she retired she took up sculpture, and has exhibited in the Royal Academy ("I wish the 'Royal' but could be removed, but that might need to wait for the revolution" she says). But her interest in art and culture is also reflected in her writings and articles. Included in this short volume is an illustrated reprint of Chanie's pamphlet on the Russia artist Kazimir Malevich and his life and times.

Malevich and Revolution examines the evolution of the artists work, and vividly brings home the provocative, challenging nature of these "avant-garde" artists living in pre-revolutionary Russia.

They walked the Moscow streets provocatively in fancy dress, with flowers, algebraic or other motifs pained on cheeks, or masks, and violently coloured shirts.... Malevich [wore] a red wooden spoon, the symbol of Futurism, in his lapel...They tried in this way to drag the established poets and painters our of their ivory towers... into the streets, to reconcile art and society.

Chanie Rosenberg's treatment of Malevich's work is fascinating, comparing him to another "giant" of 20th century art, Picasso, she writes that Malevich "had one important circumstance missing in Picasso's life - the actuality of the Russian Revolutions of 1905 and 1917. Picasso, who was a Communist, had an intellectual's orientation to the new society, but not the reality of the revolution... and this difference influenced the direction of their artistic efforts enormously."
While her discussion of Malevich's art is interesting, the way young, fledgling revolutionary society attempts to promote and develop art and artists as part of their transformation of society is equally fascinating. The Bolsheviks were keen to promote art as part of wider society, freeing artists from the need to produce art in order to live, instead living in order to produce art.
This short volume should be read by anyone with an interest in the history of revolutionary socialism, particularly that of the IS tradition. But Chanie Rosenberg's life will fascinate everyone who has an interest in ordinary people who have tried to change the world. Chanie has fought her whole life for a socialist society that will free ordinary people, economically, politically and culturally. The second half of this book is an inspiring example of how revolution can do that.

Rosenberg - 1919: Britain on the Brink of Revolution
Birchall - Tony Cliff: A Marxist for his Time
Dewar - The Quiet Revolutionary
Posted by Resolute Reader at 9:43 am

There is a mistake with the quote regarding Malevich.

"had an intellectual's orientation to the new society, but the reality of the revolution..."

should be "but NOT the reality of the revolution..."

Many thanks comrade. I've corrected the quote.