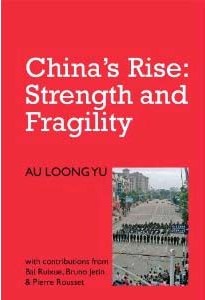 There are a myriad of books and articles being written about the rise of the Chinese economy and the conditions inside the country for ordinary people. However too few of these are being written by Marxists, particularly those who understand that China is not a socialist society (despite the continued insistence from key figures in the country). More importantly, even those who do comment from a revolutionary point of view are rarely from China itself.

This makes Au Loong Yu's book very important. Based in Hong Kong he has a long record of being involved in the working class movement as well as being a key figure in left wing journals that discuss China's history. He is also from a Trotskyist background and so explicitly rejects the notion that China is a socialist society, or was in recent history. While I might quibble with some aspects of his, and his fellow collaborators, exact analysis of Chinese history, these are very much disagreements amongst friends who want to see change in China that benefits the majority of its population rather than a tiny elite. It should be noted that several of the chapters in this book are from other authors, who very much share Yu's general analysis.

In the preface to China's Rise, Yu quotes, with only a little irony, a Chinese academic who reports that "a total of 18 different names have been used to describe China's [contemporary] system, from authoritarian capitalism, commercial Leninism to Confucian capitalism". Yu himself describes it as "bureaucratic capitalism" and I think this label works well, describing as it does a country were the ruling elite have formed from the upper ranks of the only political party, the Chinese Communist Party (CCP). However it also encapsulates the way that the lower levels of bureaucracy form part of local governing classes that overlap to a great extent with firms and companies that are the real face of China's capitalism.

Yu also points out that these officials to also gain personally from their role through their involvement in implementing the Chinese government's policies, as well as the "coercive power of the state machine". China's internal security budget is actually higher than its defence budget and involve enormous numbers, "in one county alone there are 12,093 informants which is equivalent to 3 per cent of the population" reports Yu.

All too often external commentators on China will focus on such internal repression, and while this should not be ignored, it would be dangerous to argue that this is the sole problem for Chinese workers and peasants. The real story is not just the internal repression, but the enormous growth of capitalism interests within the country. The opening up of the economy to private interests has been something of enormous interest to the world's wider governing classes. Reports in both 1997 and 2012 by the World Bank argued that China must let its state sector shrink in the interest of the private sector.

Such neo-liberal interests are not new, and have been imposed or encouraged in former "communist bloc" nations since the fall of the Berlin Wall back in 1989. But they hide enormous suffering and destruction.Yu points out that the CCP has strived hard to create a "favourable business environment" and this requires the "repression of working people". In a interesting chapter on the role of China's official trade union movement, Yu - the All China Federation of Trade Unions (ACFTU), Bai Ruizue shows how rather than fighting for its members, the ACFTU has become a tool of the CCP in implementing Privatisation and the interests of the bureaucracy. Indeed in a number of cases the authors point out that strikes and workers occupations have been broken up physically by representatives of the ACFTU's unions.

Favourable business conditions in China mean imposing major attacks on workers. In the aftermath of the Tiananmen Square democracy protests in 1989, the "CCP reacted by brutally suppressing the movement" and also the "complete restructuring" of the working class. Over the following 20 years, forty million state workers were laid off in a "wave of privatization and those who kept their jobs experienced downward mobility." At the same time, a new working class was formed from 250 million rural workers. These workers had even less knowledge of their rights, or traditions of organising and now form a major part of the new urban working class in China.

Alongside the destruction of state industry, the Chinese ruling class have taken away much from a large section of the population. In particular rights at work and the hope of a job for life, meaning a simmering level of anger. There is resistance. Yu argues however that often this resistance comes too late, as workers often don't hear about the privatisation of their workplaces until long into the process. More importantly, state repression and the lack of genuine, legal workers organisations makes action difficult. Thus while Yu agrees with other writers about the growing number of "mass events" such as strikes and protests, he is less confident that this demonstrates a growing movement as opposed to mostly isolated examples of fight back. The chapter on "resistance in China today" then is a small selection of stories of resistance, but they all show the potential for Chinese workers to seriously challenge the power of the state.

"The Tonghua anti-privatisation struggle... begun when workers found out about plans for Jianlong steel to [privatise] the company... on 24 July 2009 a worker who had previously been laid off hung a banner outside the main office saying "Jianlong, Get Out of Tonghua" and workers started to blockade the company to suspend production. Approximately 30,000 present and former workers and their families were involved... the action ended after 10pm that night following factory boss Chen Guojun being beaten to death during the protest. Jianlong withdrew their offer to buy out the mill... the workers anger had been specifically directed at Chen... he was seen as the representative of Jianlong and known for his tough disciplinarian style... Chen was paid 3 million Yuan in 2008, some of the company retirees were receiving as little as 200 a month".

Yu and Ruixue are particularly interested in a strike of 2011 by Pepsi workers, because for the first time there were co-ordinated protests at bottling plants in five different cities. Workers used social media to network and create a powerful movement. They also write briefly on the Wukan events, when a whole village of 13,000 people defied the government and elected their own representatives which were then officially recognised. This struggle against the privatisation of land is a particularly important one, because it also demonstrates the way that the CCP is often not seen to be the enemy. Workers often believe the problem is corruption by bureaucrats locally. Indeed one of the key figures in the Wukan struggle was a local member of the CCP who was then elected by his fellow villagers to head their committee.

Sadly there aren't enough of such stories, but Yu and his colleagues argue that if there is to be significant change in China it will have to come out of these sort of struggles from below. A useful chapter on historical resistance in China shows the extent to which the 1989 events were a massive blow to the whole working class. In the west we often think of Tianiman Square as being a student protest. But there was significant working class involvement, particularly in Beijing. Yu believes that a new generation of workers is now beginning to get confidence to fight and they are not weighed down by historical defeats.

As China's capitalism grows and develops it is mirroring what happened with the development of capitalism elsewhere. Millions of peasants are being forced from the land into the cities, enormous destruction to the environment is taking place and poverty is endemic. The Chinese ruling class is not all powerful and Yu makes a good argument that there is potential for it to be challenged. However he leaves us in no doubt that this will require an enormous struggle.

There is much of interest in this book for those trying to understand China today. The chapters on the role of Chinese liberals and Tibet are particularly useful as they illuminate from a revolutionary Marxist perspective subjects that are dominated by neo-liberal thought normally. I was less taken by the chapter on wider Chinese history as I felt that it painted to bright a picture of China under Mao and the 1949 revolution. Rather than creating a socialist society as the author seems to argue, this seemed to be more of a argument of the way that a state could provide for improvements for millions of people. The lack of any descriptions of mass workers movements, or organisations such as workers councils would support this view. Nonetheless this does not invalidate the way that the turn by the CCP towards capitalism is destroying the lives of millions of people. As I argued at the beginning, these differences however are ones that do not undermine the usefulness of this book. Ultimately it will be up to the workers and peasants of China itself to settle some of the unresolved differences.

Did the working class of China really feel that Tiananmen was a terrible defeat? I am really not so sure that is, or even was the mood in China. Perhaps in Beijing but universally across China? I think not. In fact there was a wave of workers unrest in China under left-wing and revolutionary slogans in the mid 1990s hardly an indication that the workers were hammered by TIananmen Square. Furthermore the working class has undergone a massive demographic transformation, some 250 plus million urban workers today did not even exist as workers in 1989.
In China there are workers councils, which constitutionally have the right to elect managers. And workers have engaged in ferocious militant struggles around 2004-5 based on these organizations.
The term bureaucratic capitalist is as meaningless as when it was used by Mao. What are the dynamics of the economic formation in China? My own studies tell me that they are actually non-capitalist, in the sense that the laws of motion of capitalism do not dominate the Chinese economy. (Commodity production for profit.) Not yet anyway. That is why China is expanding faster than any significant capitalist country has ever done. It invests massive resources where there are no profits to be made, or where the private sector is unable or unwilling to invest.
The party is in power precisely because it has remained determined, so far at least, to prevent capitalism from taking over the banks and the commanding heights of the economy.