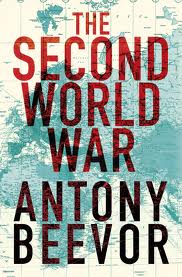 Given that British bookshops groan under the weight of tomes about World War Two, readers would not be mad to wonder whether or not there is any need for a new book chronicling the war. However this new history by the author of Stalingrad and Berlin is well worth the effort of its 800 pages. Part of this is to do with Beevor himself. He has an unparallelled grasp of the historical material and he writes very well indeed. He isn't prone to the disease that afflicts many western writers when discussing the Second World War, in that he recognises that the war was not won by Britain on her own, nor even by the military and industrial might of the United States. He understands that these were important, but not so important as the role of Russia's enormous reserves of manpower and industry.

Thus, for those brought up on what might be loosely called the Daily Mail view of the world, there are some strange omissions. The Luftwaffe's Blitz on British towns and cities receives very little coverage compared to Beevor's discussion of the destruction of German towns and cities. Britain is not, after all, the centre of the world. But Beevor doesn't limit himself to a history based on relative importance of different events. He is also extremely critical of the way that the war was prosecuted. In particular, two favourites of the British view of the war, Bomber Harris and General Montgomery receive short shrift from Beevor's analysis of the war. In particular Beevor notes the limitation of Harris' strategy of defeating Germany by mass bombing of cities, as well as pointing out on a couple of occasions the way that Bomber Commands attacks often had a negative role for Allied soldiers on the ground. Take the capture of the German town of Cleve. Beevor writes that "Harris's bombers had smashed the city for once with high explosive instead of incendiaries, which made it far harder to capture because the Germans fought from the ruins."

Beevor never diminishes the heroism of the fighting men, whichever side they fought on, though he never paints either side as fighting with some angelic pureness. Beevor documents the atrocities, the massacre of prisoners of war and civilians, but points out that these were never just the Axis powers. Sadly British and American troops were also guilty of such crimes, though rarely were they disciplined for it. Indeed sometimes it was encouraged by commanders who would not, or could not deal with the prisoners.

Elsewhere, in Berlin Beevor has documented the forgotten history of the mass rapes that took place as the Russians captured German cities. But this was not limited to Germany. Russian soldiers were particularly brutal towards Japanese women in towns they captured in China. But other Allied troops from Britain and the US were certainly guilty of similar crimes in South East Asia, in part because of the brutal nature of that war.

It is the brutality of the conflict that shines through Beevors book. Almost every page tells the stories of casualties on a scale that defies comprehension. 1000 killed in a bombing raid, 2000 lost in a pointless attack or defence, 10,000 dead in a firestorm or forced march. This is the logical conclusion of total war in a time of mass industrial production. But Beevor also locates the Holocaust, with its mass murder of Jews and others in the context of the brutal genocidal war being fought on the Eastern Front. Hitler certainly wanted to eradicate the Jews, but the mass murder was the consequence of this anti-Semitic propaganda combining with a brutal war that dehumanised everyone involved in it. That said, Beevor makes it clear that many people, including leading members of the British and American governments knew about the death camps, and decided not to act on their intelligence.

We often forget that the Second World War encompassed far more that Europe and the Pacific. So Beevor includes in his grand narrative the war between China and Japan that began in 1937 and places that are often forgotten in shorter histories - Burma, Singapore or Yugoslavia for instance. In places Beevor is necessarily brief, though for those parts of the history I knew well, he often sums up a complex story accurately in a couple of paragraphs. But Beevor's tale is not always a distant over-view. By illustrating his history with more personal accounts the reality of conflict is brought home all to well. Here is one harrowing, but short description that sums up the dirty nature of hand to hand fighting in Warsaw when the Poles rose up against the German occupiers but were left high and dry by the Red Army in 1944.

"A nine-year-old was seen to climb onto a German panzer and throw grenades inside. Both Germans and Poles froze in disbelief at the sight. 'When he jumped down,' and eyewitness recorded, 'he raced off to the gate [of a tenement building] and there burst out crying.'"

One theme that runs through Beevor's book is that World War Two was important because it setup the world (and the conflicts) that would come after the defeat of Germany and Japan. The famous account of Stalin and Churchill drawing up the ratio of influence of the two powers in post-war Europe is here, as are wider discussions about the impact of the post-war agreements on the people of the Middle East and Asia.

Antony Beevor's latest book is one of the best single volume histories of World War Two that I have read. While it is limited in part by its concentration on the military side of the war (there is only a little of the social history that concerns, say, Angus Calder or the revolutionary potential of mass movements that Donny Gluckstein has recently written about) it does not ignore wider questions. The book gives a detailed overview of the conflict and provides an excellent introduction into this important, world changing war.

was not one by Britain on her own,

was not won by Britain on her own.